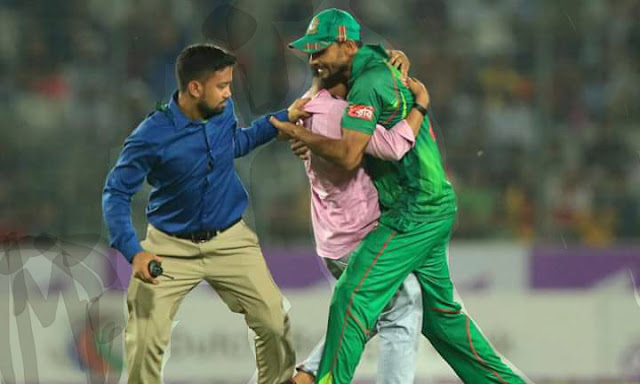 Emotions?
No, not at all. This is not to say that emotion. It’s madness. Blind fury. It stupiditi shear.
Mashrafe want to hug? Mashrafe one eye to see that we had to stand for hours in front of the Stadium in Mirpur know much. In front of the gate, the house on the street, come to the mosque, day after day, roam around, and many people who know about. When they went home with Mash Narail, Khulna, I saw a man come out of Narail. Take a look at.
Therefore, a lot of time walking the streets naramyali home. Many people want to come and take pictures. Selaphi always feel very happy, therefore, that raises not. According to him, the issue of human emotions took selaphi. When they first met, would handshake, embrace held, talked, took autographs, asked wellbeing. Selaphi to act now if we were! But without selaphi, one hand on the roads increases, therefore, hugged him and pulled the chest. I saw with my own eyes on numerous occasions. Bangladesh’s Mashrafe easiest than any celebrities embrace hugging.
I mean, every emotion Mashrafe way to show that there are hundreds, there are a thousand ways. Going into the match in the middle of the field in any way … I repeat, is not in any way the right way. In any way, it is not justified for any reason.
Therefore, it is very saphatalii said at a press conference after the match. So the problem is not the security of the people. First of all, it is expected from Mashrafe. Therefore, do not say never, but it is a matter of concerns. Secondly, it’s a little negative about the Bangladesh captain said nothing would be international news. BCB security measures will be questioned. It certainly would not want to captain.
But the visitors should keep in mind as well as our responsibility. Some of it may not be too much. Must not be. This means future-tolerated, but encouraged the faction had fear. In particular, a very sensitive time when the country’s cricket. England has brought a lot of trouble, as soon as they arrived. If it was something big? But the audience saw the beginning of the race was therefore puzzled. Realizing he was normal. Therefore, a great way to be able to cope. If it was someone else, or something else … anything could happen! The game could have been a big loss.
This incident is further stirred prasnagulio BCB security measures. Normally, there are going to be-tambira. Thanathana at work!
Again, there is an emotional thing in my head. But it is not in any way emotion. Mashrafe of passion is never sbasta. Mashrafe of incredible emotion, adventure, unusual of all stories are examples. The game, Mashrafe stantabaji never selfishly endanger can not be affective.
Mashrafe of the passion should be, is not the question!

"I came to win": midfielder Yazici – about the transition to CSKA

Gabulov harshly criticized Safonov for his comments about Akinfeev

"I came to win": midfielder Yazici – about the transition to...

Gabulov harshly criticized Safonov for his comments about Akinfeev

The source called the minimum number of hockey players for the...

The head of the UFC called the approximate date for the...