Lokomotiv lost to Italian Lazio in the Europa League group stage match.
The match took place on Thursday in Moscow and ended with the victory of the guests with a score of 3: 0. The double was scored by forward Ciro Immobile, who converted a penalty in the 56th and 63rd minutes, another goal was scored by Pedro (87).

“Lazio” went to Moscow, realizing the possibility of early access to the playoffs of the Europa League. The head coach of the Italian team, Maurizio Sarri, admitted ahead of the game that the main forward and team captain Ciro Immobile is in suboptimal shape after an injury. There was a possibility that he would be saved to fight in Serie A, where Lazio are in the lead, as well as to prepare for the decisive game of the group stage of the Europa League. But Sarri decided to release Immobile from the first minutes. And he made the right decision.
© / Grigory Sysoev
Go to the photo bank
Lazio head coach Maurizio Sarri
“Lokomotiv” on the most important match of the European Cup campaign released 17-year-old goalkeeper Daniil Khudyakov, and did it not because of a good life. Khudyakov became the youngest Russian goalkeeper in the history of European competition, but the coaching staff would gladly postpone this debut to a later date, if not for the injury of the main goalkeeper Marinato Guilherme.

At the same time, Khudyakov was not at all shaded in his first match in the Europa League. Surely he benefited from the October segment, when Daniel replaced the disqualified Guilherme in RPL matches. In the first half, the Italians did not pose any insoluble problems for the goalkeeper, but several times he had to demonstrate why the coaching staff of Marcus Gisdol was counting on him so. Serves from corners were especially dangerous, but Khudyakov played confidently at the exits and in one moment did not allow the ball to be sent by the collar.
“Lokomotiv” was active in attack – in the absence of Fedor Smolov, Vitaly Lisakovich tried to prove himself, but he noticeably lacked composure and understanding with partners. All creativity actually went through Konstantin Maradishvili: the young midfielder was dragging the ball forward, setting the pace for the attacks, looking for Lisakovich and Francois Camano with a sharp pass. But still, the owners did not work out for one hundred percent moments. 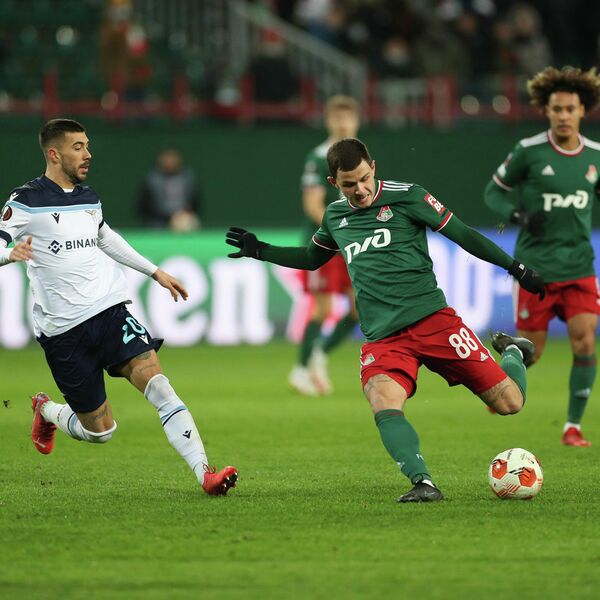 © official twitter of FC Lokomotiv
Lokomotiv forward Vitaly Lisakovich (right)
The beginning of the second half was decisive in the match. Within seven minutes, the Italians, who did not admire their attacks, took advantage of the opponent’s defensive mistakes. First, Alexander Silyanov made an absolutely reckless tackle in his own penalty area, and Immobile converted the first penalty, separating Khudyakov and the ball in different corners – 0: 1. Seven minutes later, captain Dmitry Barinov played inadvertently, and this penalty raises questions for the refereeing team of Portuguese Arthur Dias. Be that as it may, Immobile was accurate the second time – 0: 2. Chiro did his job and went to the bench almost immediately.
Basically, the game was done. The substitute Smolov could not bring the sharpness ahead, literally dissolving on the field. But the players of “Lazio” several times fell out on the lonely Khudyakov, but they could not beat him, which caused delight among the fans. The stands, by the way, very loudly supported the young goalkeeper, but this did not save him and Lokomotiv from the third goal, when Pedro’s long-range strike reached the goal – 0: 3.
© / Grigory Sysoev
Go to the photo bank
Lazio players celebrate a goal scored
Lokomotiv again lost to Lazio (the Italian club won the first meeting 2-0) and lost their chances of reaching the Europa League playoffs. But the railroad workers still have a chance to make their way to the League of Conferences, for this in the last round they have to beat the French “Marseille”, which lost to the Turkish “Galatasaray” – 2: 4.