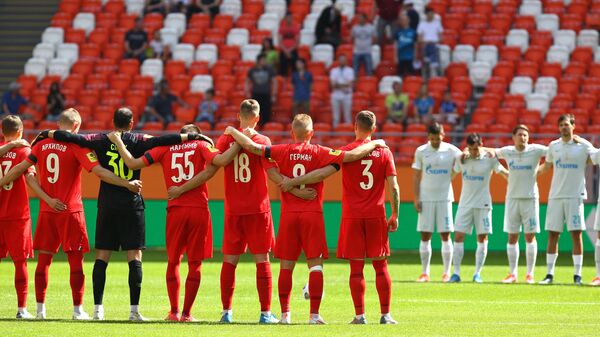 MOSCOW, 26 Nov – The Control and Disciplinary Committee of the Russian Football Union (RFU) has banned Tambov CEO Olga Konovalova from carrying out any football-related activities for three years, according to the RFU website.
Konovalova was punished for unscrupulous and unreasonable actions that led to the loss of “Tambov” professional status for unsportsmanlike reasons.
In addition, the FTC RFU separated the case of the former sports director of Tambov Pavel Khudyakov into separate proceedings. The meeting will take place on December 10.
At the end of September, police officers detained Konovalova. She is charged with one episode of large-scale fraud, and is also suspected of three episodes of large-scale fraud and one episode of large-scale fraud. Konovalov, who is accused of a scam with financing the club, was taken into custody until January 26, 2022.
On Wednesday, the police detained Khudyakov on suspicion of fraud. The representative of the Ministry of Internal Affairs for the Tambov region said that this was a fraud with the financing of a football club. On Friday, the Leninsky District Court of Tambov concluded Khudyakov in custody until January 23 of the following year, inclusive. The former sports director of “Tambov” is accused of four counts of fraud.
“Tambov” finished the 2020/21 season on the last line in the standings of the Russian Premier League. The club’s participation in the championship after the winter break was questionable due to financial problems. The team from Tambov was able to finish the season thanks to the help of the league and other clubs. At the end of the season, “Tambov” said goodbye to the fans.
The Arbitration Court of the Tambov Region on October 20 declared “Tambov” bankrupt, the requirements for the club at that time amounted to almost 377 million rubles. The initial bankruptcy procedure – observation – was introduced by the court against Tambov at the club’s request in April. The bankruptcy statement of the club said that as of January 31, 2021, the amount owed to creditors was about 537 million rubles.