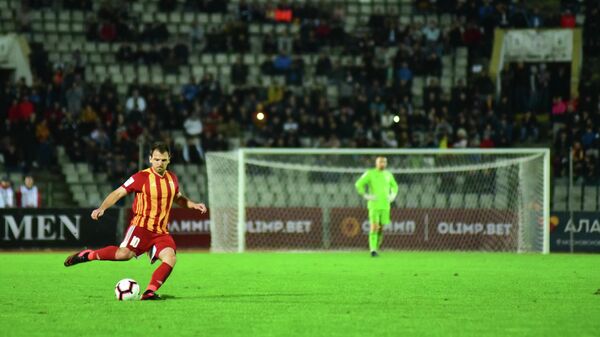 “Neftekhimik” defeated “Alania” in the match of the Football National League

MOSCOW, May 6 – Vladikavkaz “Alania” lost to Nizhnekamsk “Neftekhimik” in the match of the 36th round of the Football National League (FNL).
The meeting, held in Nizhnekamsk, ended with the score 5:2 in favor of the hosts. Merabi Uridiya (18th and 45th minutes) scored a double among the winners, Pavel Baranov (2) and David Khubaev (75) also scored. Own goal scored by Alania defender Khetag Kochiev (12). David Kobesov (36) and Vladimir Khubulov (38) scored goals for the guests. At the 51st minute, Kochiev was sent off.
“Neftekhimik” with 55 points is in eighth place in the standings. “Alania”, gaining 57 points, is on the sixth line. In the penultimate, 37th round of the championship on May 15, Neftekhimik will play away with Tekstilshchik Ivanovo, and Alania will host Rotor Volgograd.
May 10 “Alania” will take Moscow “Dynamo” in the 1/2 finals of the Cup of Russia.