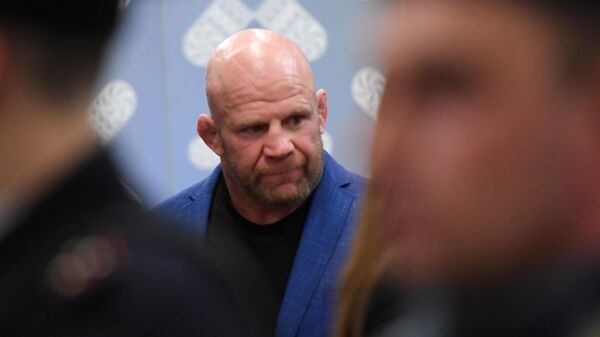 LUGANSK, 19 Nov – The famous American mixed martial arts fighter Jeff Monson is shooting a film about Donbass.
“We are filming a documentary. We want to show not only the war that is going on here, but also how ordinary people live. We believe that apart from the Russian people, most people in the West have forgotten about the conflict that is going on here. We want to show the Western world, that this war is still going on, people, unfortunately, are still suffering because of this conflict and we want to help people as much as we can, “Monson told reporters during a visit to the self-proclaimed Luhansk People’s Republic.
He clarified that he had met with the head of the LPR, Leonid Pasechnik, and that he supported the idea of ​​creating such a film. “We see with our own eyes how people really live here, and it is very offensive when people see the wrong picture in the Western media,” the athlete added.
This is not the first time Monson visits the territory of Donbass controlled by the republics; in 2016 he already received an LPR passport and opened a children’s sports school in Luhansk.
In April 2014, the Ukrainian authorities launched a military operation against the self-proclaimed LPR and DPR, which declared independence after the coup d’etat in Ukraine in February 2014. According to the latest UN data, about 13 thousand people became victims of the conflict. The issue of resolving the situation in Donbass is being discussed, in particular, during the meetings of the Minsk contact group, which since September 2014 has already adopted three documents regulating steps to de-escalate the conflict. However, after the armistice agreements between the parties to the conflict, shootings continue.