Drama at the World Snooker Championship. The Australian repeated the historical record, but still flew out 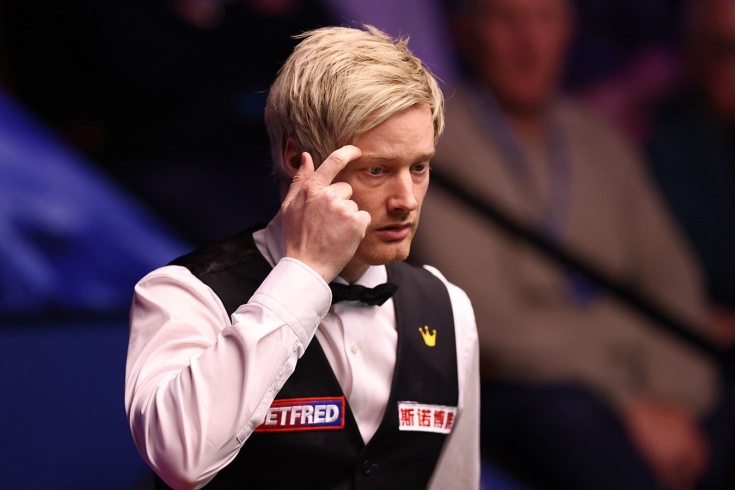 Events at the end of the World Snooker Championship unfold quickly. The audience will not have time to blink an eye, as the new title holder will be known. The quarter-finals started on April 26, and the final will end on May 2.
Of course, each of the seven decisive battles will be bright in its own way, but one of the main dramas of the entire tournament happened back in the 1/8 finals in the confrontation between the Australian Neil Robertson – the third number of the world ranking, world champion in 2010 – and the much less titled Englishman Jack Lisowski.

Lisowski was remembered by a wide range of spectators in Russia for wanting to compete at the World Championships with a badge in the shape of the Ukrainian flag on his vest. The organizers forbade him to express his political position in this way, however, as it turned out, Jack carries it with him in his pocket.

However, Lisowski showed himself not only with words about Ukraine. He is really good at the game and deservedly reached the quarter-finals of the World Cup already – which is cool, considering that earlier in 10 years he made it to the second round only twice, and usually just dropped out of qualification.

The quarter-finals Robertson – Lisowski turned out to be very tense. Jack won the first day with a score of 9:7 on frames, and on the second he immediately won the tenth. Before entering the next round, it was necessary to defeat the opponent three more times, but Robertson showed class. In the 18th frame, he won a tactical duel for the last red ball (10:8), and in the 19th, he completely repeated the historical record, which was conquered only by a few: he became the eighth player in history to make the maximum break of 147 points. The audience at the Crucible roared with delight, and even Trump and McGill, who played their match behind the partition, had to pause to congratulate their colleague.

Video rights belong to Eurosport. The video is available on the Eurosport Snooker YouTube channel.

The maximum break gave Robertson confidence: he won two more frames and took the lead (11:10). The 22nd frame was left for Lisowski, but in the 23rd Jack did not take advantage of the opponent’s mistake, and Robertson was one step away from victory. But the third number of the rating was not destined to win the match. Lisowski played excellently in two decisive frames, and the fate of the fight was determined by the Briton’s masterful snooker on the brown ball.

The final score is 13:12 in favor of Lisowski. And the 2010 world champion for the next (eighth consecutive!) time cannot even reach the semi-finals.

Of course, the maximum break improved the Australian’s mood and replenished his pockets. Robertson, even after the defeat, looked inspired:

“The season has been amazing. If I had also won the World Cup, I would have had one of the best seasons in history. Making a 147-point break at 8:10 was incredible. Everyone has a dream to do it at the world championship”, – quotes the words of the BBC athlete.

Lisowski in the quarterfinals of the World Championship fights with John Higgins, and the first part of the confrontation was not in favor of the Briton – 3:5.

With the same score, Judd Trump beats Stuart Bingham. But Mark Williams and Ronnie O’Sullivan are even closer to the semifinals: they beat, respectively, Yan Bingtao and Stephen Maguire with a score of 6:2.