Chernobyl, football, Pugacheva: 36 years since the tragedy in Pripyat

Exactly 36 years ago there was an accident at the Chernobyl nuclear power plant. Information about the disaster was hidden for a long time. People continued to lead their usual way of life and did not know about the existence of a threat. The next day after the incident, the USSR football championship match between Dynamo Kyiv and Spartak Moscow took place. A hundred kilometers from the epicenter of the explosion, 82,000 people watched the game. Behind the scenes of the most dangerous match in the history of Russian sports – in the material

And the stadium is full

“Republican stadium. April 27. Clear. 16 degrees.” This is how part of a small note in the newspaper “Soviet Sport” looked like a day after the match in Kyiv. The season was just picking up steam. Therefore, the meeting of the 7th round, although it was fundamental, could not seriously affect the tournament layouts.
The home team controlled the game. In the first half, Yakovenko and the future Ballon d’Or winner Belanov organized a comfortable advantage. At the same time, Kyiv could issue a rout even before the break, but “Spartak” rescued Dasaev several times.
In the second half, Dynamo played in a row and relaxed a little. However, even Rodionov’s goal in the end did not prevent the match from winning. The 82,000 spectators who gathered in the stands were satisfied. Wards Lobanovsky went to prepare for the final of the Cup Winners’ Cup against Madrid “Atletico”, and “Spartak” on the same evening, the whole composition boarded the train in the direction of Minsk. Two days remained before the first announcements about the tragedy in Chernobyl. 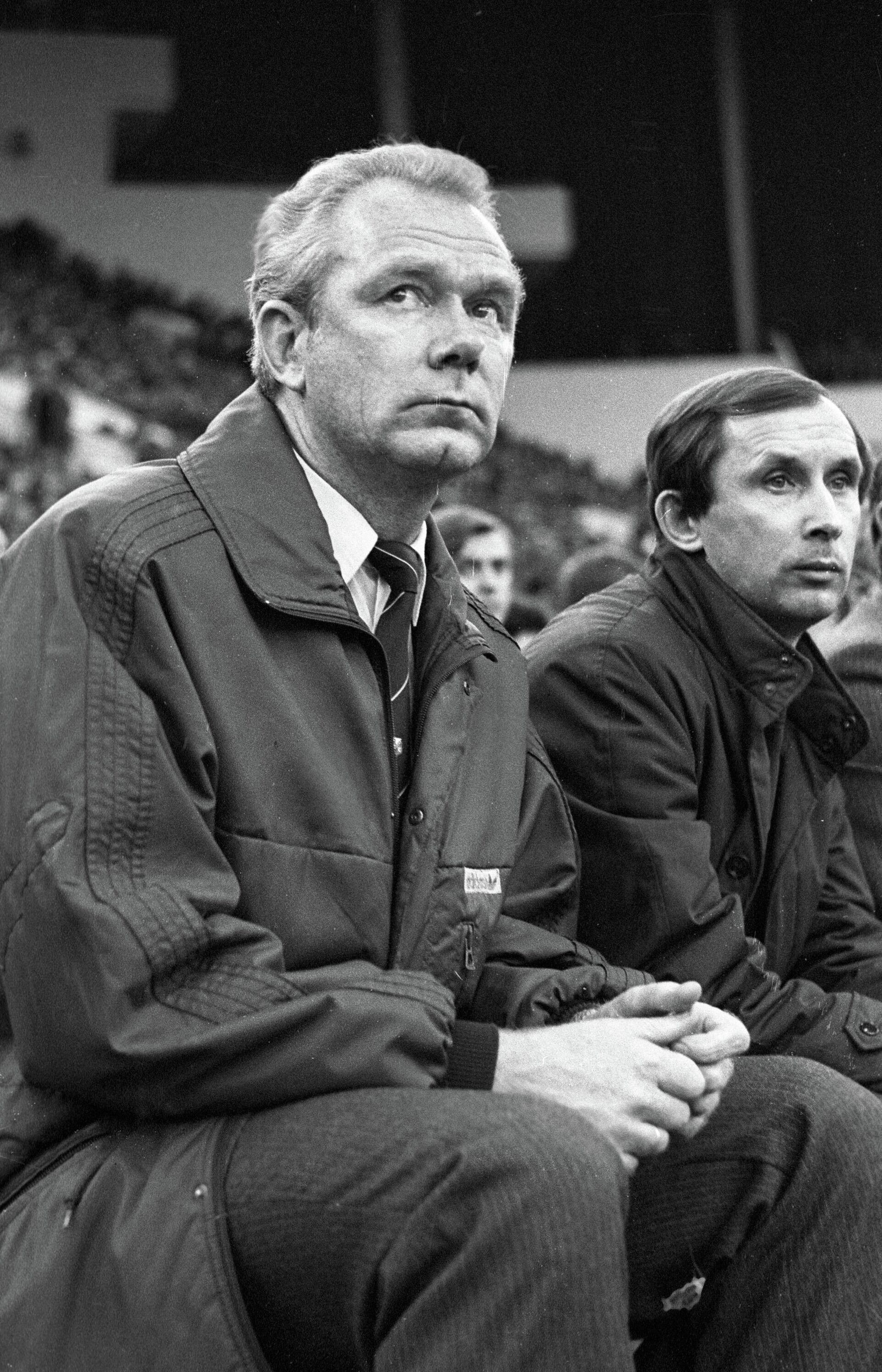 © / Nikolaev
Go to photo bank
Valery Lobanovsky
“I remember that day as if it were yesterday – bright sun, not a cloud, summer warmth. And also the favorite poster of the people of Kiev: “Dynamo” – “Spartak”. Perfect! I don’t think that at least one person going to the stadium thought about the radiation background in the city. People smiled at each other, rejoiced at the weather,” journalist Viktor Branitsky recalled.

The broadcast of the Vremya program on April 28 began with a brief mention of the accident. The extent of the incident was covered up. It seemed that the situation was under control and there was no need to worry too much about it.
“From the Council of Ministers of the USSR. An accident occurred at the Chernobyl nuclear power plant. One of the nuclear reactors was damaged. Measures are being taken to eliminate the consequences of the accident. Assistance is being provided to the victims. A government commission has been created,” the screens reported.
“Spartacus” learned about the incident by accident. The puzzle began to take shape after an unsuccessful double match in Minsk. Beskov was upset. He ordered the team administrator to reissue youth team tickets and send the players home. “Send them to Moscow today! I don’t want to see them!” – Konstantin Ivanovich was indignant.
Alexander Hadji went to the station, not counting on the success of the operation. Fitting the team onto the train, tickets for which had long been sold out, seemed like an impossible task.
“I went to the ticket office: “May I?” – “Yes, please!” It turns out that all the trains are empty. And no one understands what and why. And only after our match in Minsk, some information began to arrive. Chernobyl, the accident, radioactive clouds went to Europe. And this is a week after the explosion,” Hadji said. 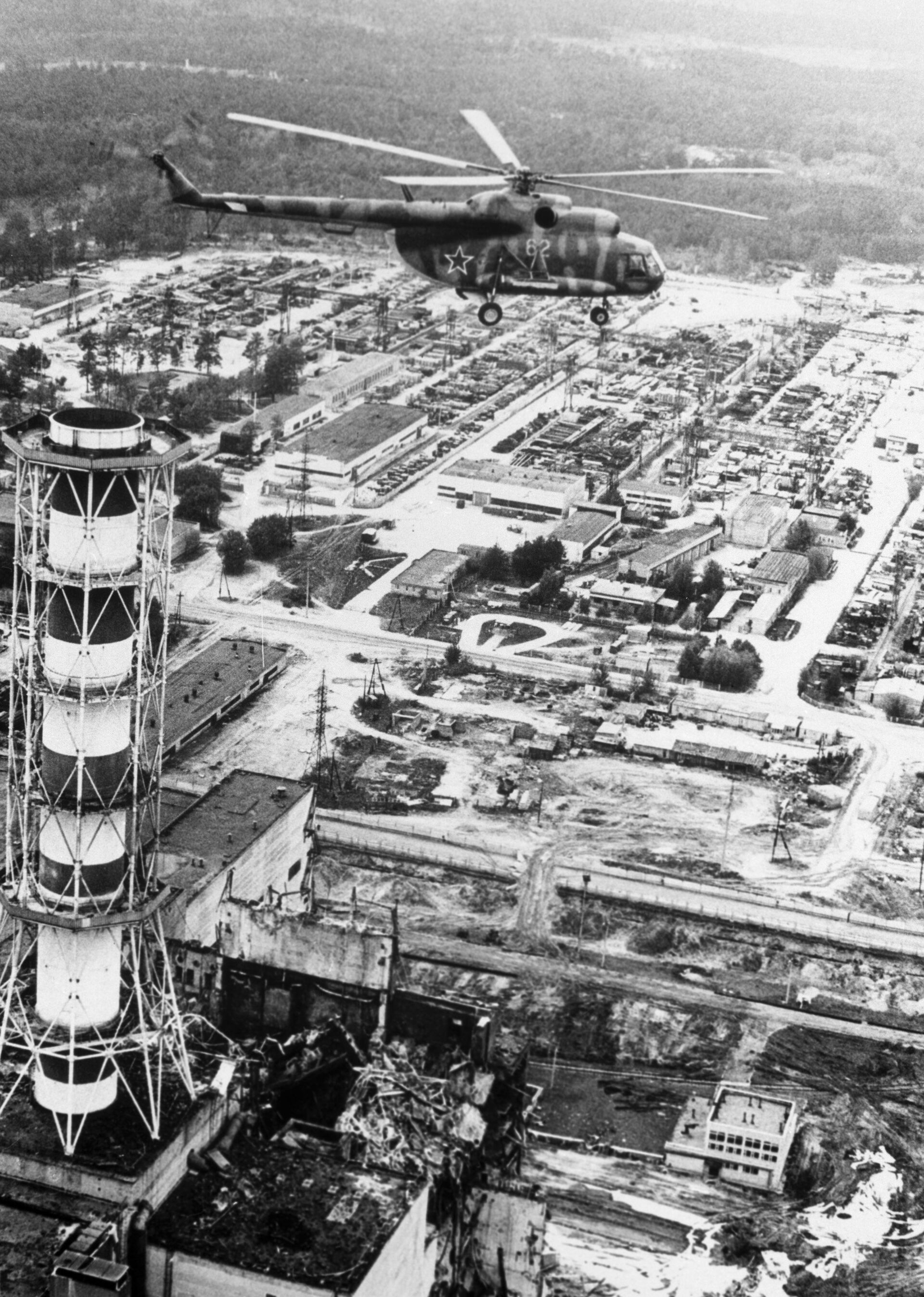 © / Vitaly Ankov
Liquidation of the accident at the Chernobyl nuclear power plant
Everyone on the team panicked. At the same time, there was no talk of any quarantine. Club administrators were given “Zubrovka” as a preventive measure. Fortunately, the radiation cloud passed Minsk. According to the same Hadji, the fact of living in an old hotel also helped. The walls of the building were several meters thick.
Before the rest, the former Spartak defender Alexander Bubnov began to notice oddities. Even in Kyiv, he felt weak. The football player was also alarmed by the weather during the match.
“For some reason, before the match with Dynamo, we were put in another hotel. I slept very badly, in the morning I was sluggish. And at the stadium, it seems, we were quite lethargic. Kyiv drove us. What else was unusual? Very strong wind. This has never happened at the stadium in Kyiv. But we were lucky – it was not blowing from Chernobyl. And at night, perhaps, there was a different radiation situation, “Bubnov shared.

“Yes, you are irradiated!”

Lobanovsky found out about the incident immediately after the game with Spartak. They say that he was in close contact with the general secretary of the Communist Party of Ukraine, Vladimir Shcherbitsky. However, the coach tried to protect the players from unnecessary information, as there was an important match ahead.
“The accident happened at the end of April. I found out about it on the bus after the match with Spartak. Lobanovsky told Puzach: “A reactor exploded at the Chernobyl plant. It’s OK. The fire was extinguished, two people died. “No one could have imagined how serious everything was. The details were learned a couple of days later in France, where they arrived at the Cup Winners’ Cup final. There, reports about Chernobyl were played on all channels. And they shied away from us like lepers : “Yes, you are irradiated!” – Recalled the defender of “Dynamo” Vladimir Bessonov in an interview with the “Championship”.
At the Paris airport, the team was met with microphones and dosimeters. Kyivians fought their way through the crowd. Ahead of them was a training session in the French capital and a flight to Lyon. At the stadium “Gerlan” on May 2, “Dynamo” defeated “Atletico” with a score of 3:0. The Soviet club was supported by the end of the match even by Spanish fans. However, the match was remembered for one more moment – the beginning of the report by Valentin Shcherbachev.
The meeting could easily have been the last in a journalist’s professional career. Shcherbachev decided to tell the whole country about the Chernobyl disaster. He himself later admitted that he did not discuss his adventure with anyone. As a result, he got off with a verbal reprimand and suspension from the air for two matches.
“I clearly understood: as soon as I said, the editing would cut down the sound. And there was someone to replace me. But this could not be allowed. I wanted everyone here, especially in Ukraine, to know what a disaster happened. I interrupted unilaterally – I started the report from this. Yes, I heard in the headphones, as in Moscow, after a pause they said: “What are you doing?” Obviously, they were feverishly deciding whether to turn it off or not, but the line-ups did not have time to hear, perhaps. It was still a late report, and my colleague, probably, was not aware of everything. Probably, they decided: “I spoke, and in the morning we will cut it out in the repeat.” So in the end they did: my words were not in the repeat. But in direct On the air, I said about this big trouble,” Shcherbachev shared. 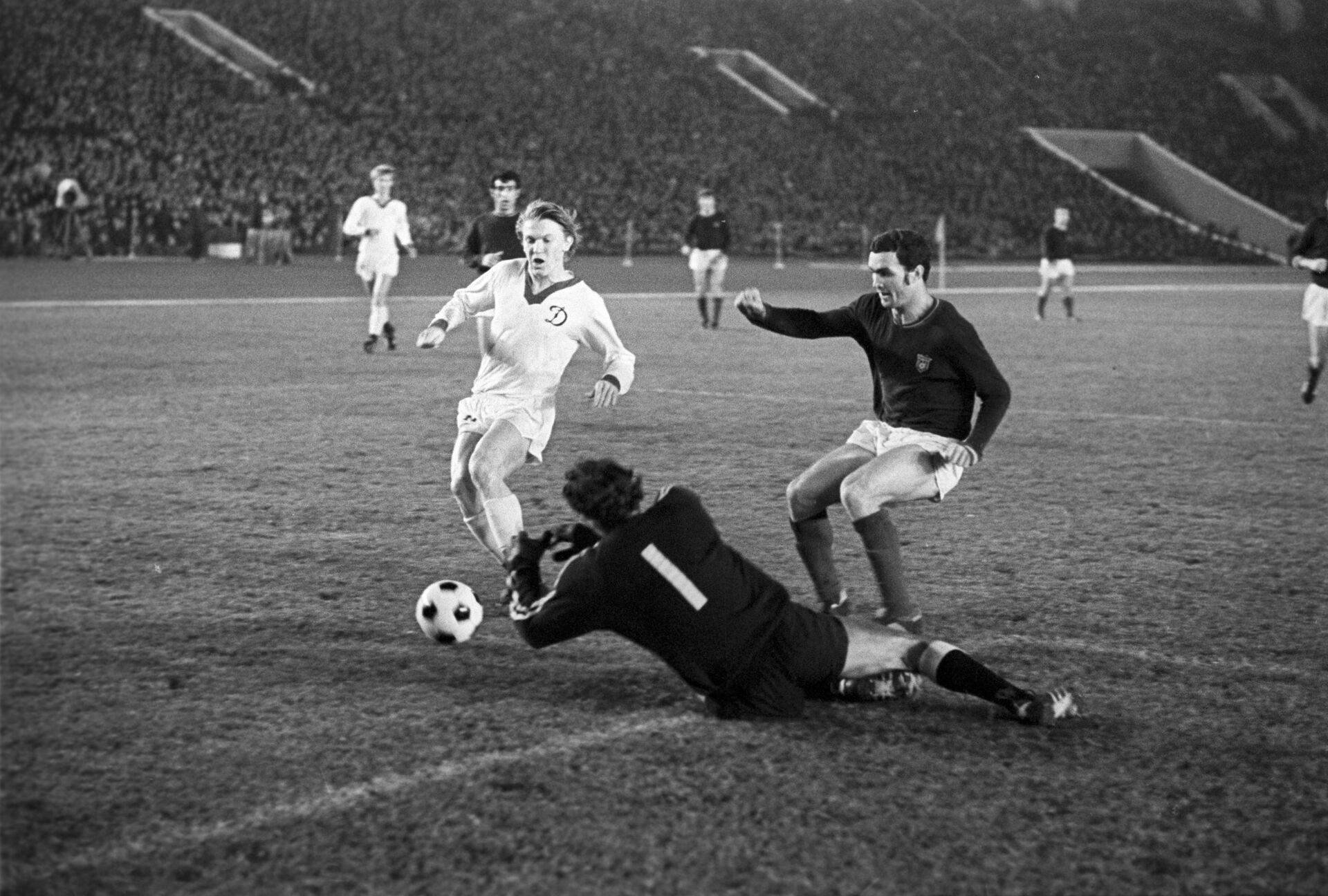 © / Morgulis
Go to photo bank
Oleg Blokhin (left)
One of the main characters of the final, Oleg Blokhin, missed the game with Spartak. The forward was worried about the injury of the back of the thigh. In France, he began preparing for the match on an individual program. This did not interfere with the attention of the local press. Journalists went to the trick to avoid refusing to comment. Girls with voice recorders were sent to him. In the final, Blokhin scored one goal, and after a while he was surprised at the creativity of French correspondents.
“I remember in one of the French newspapers they wrote that Dynamo won the Cup of Cups thanks to Chernobyl. Like, we swallowed radiation and began to run like clockwork. All football Europe was buzzing about this,” the striker recalled.

May Day, Cycling Race of Peace and Pugachev

The day before the Dynamo match, the people in Kyiv rushed to the May Day demonstration. About 120 thousand people took part. The supreme power of the country did not cancel the celebrations. People still did not know the full picture of what was happening. The radiation background at that time exceeded the norm by 500 times. 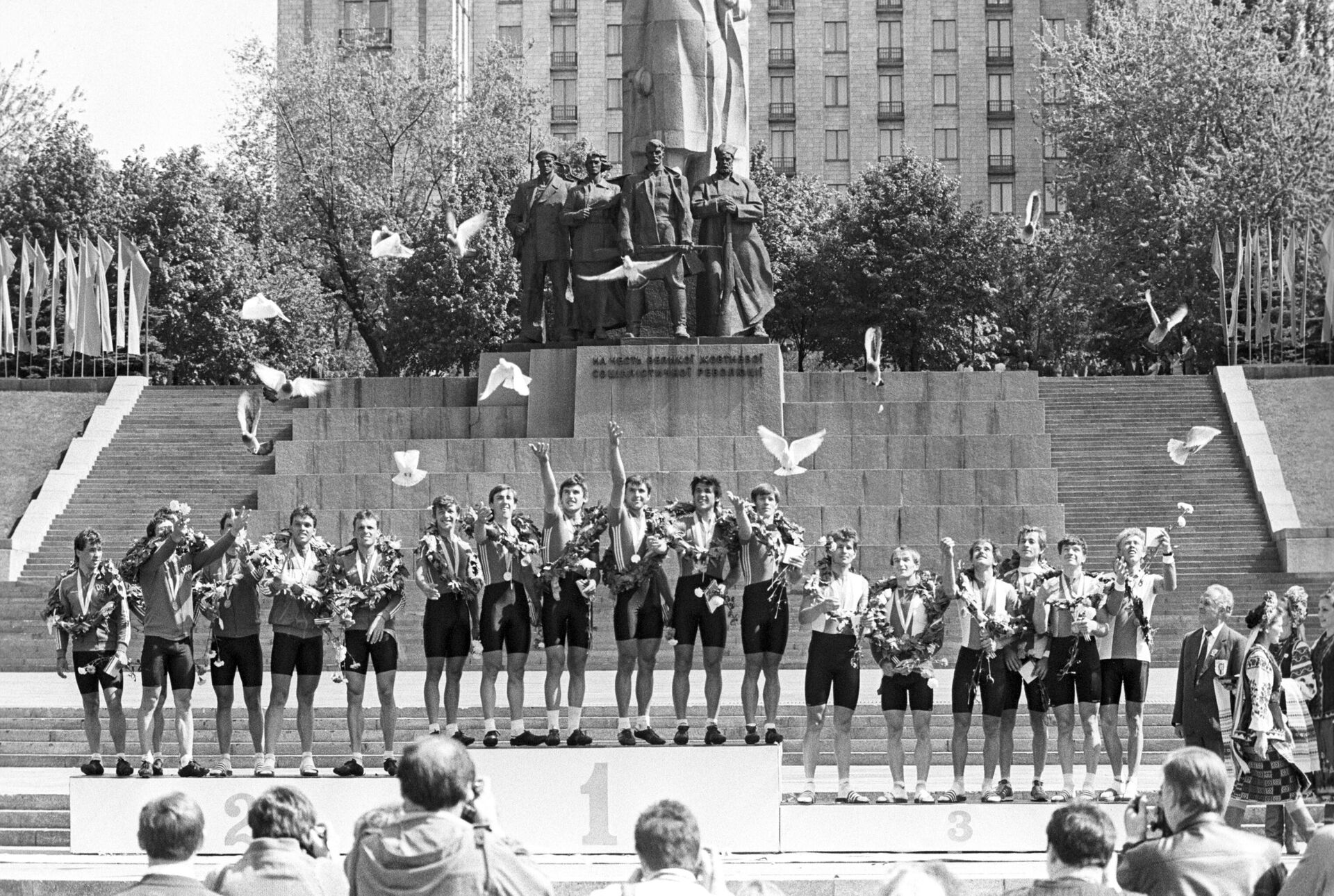 © / Igor Kostin
Go to photo bank
Winners and prize-winners of the World race. 1986
The situation has not changed even after five days. On May 6, the 39th World Cycle Race was launched on Khreshchatyk. Thousands of Kyivans again came to the sports festival. Watching this from the outside, one could not even think that just 10 days ago there was an accident at a nuclear power plant nearby. The pioneers happily waved their flags and greeted the athletes, the judges started the stopwatches, the journalists scribbled notes, and the cyclists raced through the streets of the city.
The level of radiation was reported only on May 7th. At the same time, the message said that the norm was not exceeded. The Peace Race in the USSR started for the first time. But this time she did not bring peace to anyone. Soviet pop stars tried to restore it, the usual order of things, to support the victims and liquidators of the accident. 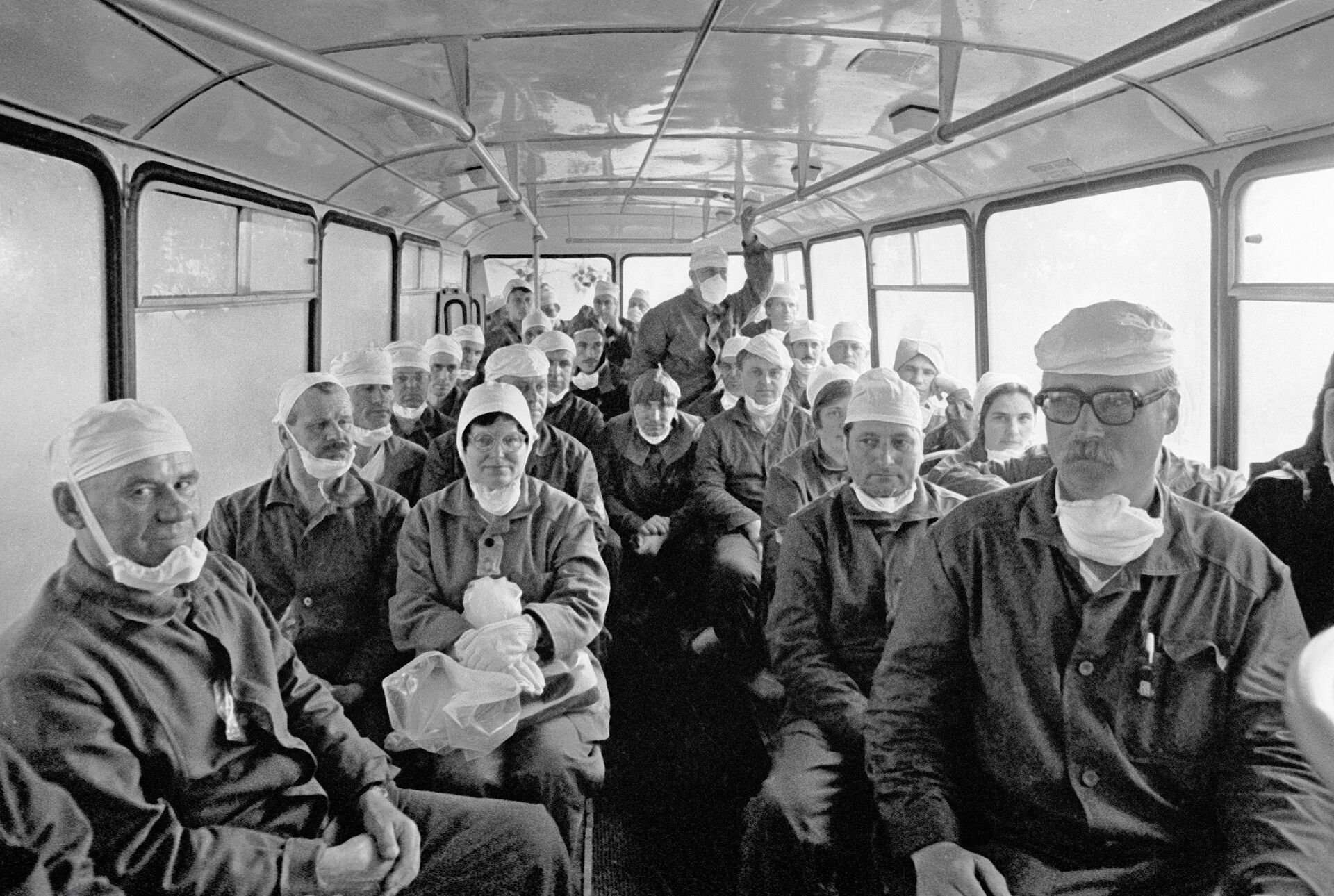 © / Boris Prikhodko
Go to photo bank
Joseph Kobzon was the first to arrive in Pripyat. On June 1, the singer gave a four-hour concert just a kilometer from the explosion site. About seven thousand people wanted to listen to Kobzon, but the hall was designed for three hundred spectators. After the concert, he talked for a very long time with those who came and tried to cheer them up.
The next was Valery Leontiev. In August, the artist played two concerts over several days. He often admitted that the city shocked him – deserted streets, abandoned houses. Leontiev did not consider his trip a feat, calling it an ordinary job. A huge number of spectators came to look at the star again, and again some of them remained on the street due to lack of seats.
For a long time and persistently, the liquidators asked Alla Pugacheva to come. The prima donna gave a concert in the village of Zeleny Mys in September 1986. It was then that the song “Two Stars” was first heard. Pugacheva was able to distract people for several hours at a very difficult time for them. The singer herself seriously undermined her health during the trip. After arriving in Moscow, she recovered for a long time, her voice suffered greatly.