Home News Daniil Medvedev reached the 1/2 finals of the tournament in Halle, beating...

Daniil Medvedev reached the semi-finals of the tournament in Halle, defeating the most uncomfortable opponent. According to the Russian, he is essentially playing now “without brakes”, because he does not think about Wimbledon.

The ATP-500 tournament in Halle, Germany, as a whole turned out to be quite successful for the Russians. And this is despite the early departure of Andrei Rublev (3rd seed) and Aslan Karatsev. Karen Khachanov (8) made it to the 1/4 finals, having given only a set to two opponents – just to Karatsev at the start of the competition. But Daniil Medvedev (1), who returned to the top of the world rankings on Monday and played in the ATP-250 final in Hertogenbosch on Sunday, went to the quarterfinals of Halle without losing a set. First, Daniil dealt with the Belgian David Goffin – 6:3, 6:2, and then for the second week in a row beat the Belarusian Ilya Ivashko – 7:6, 6:3. 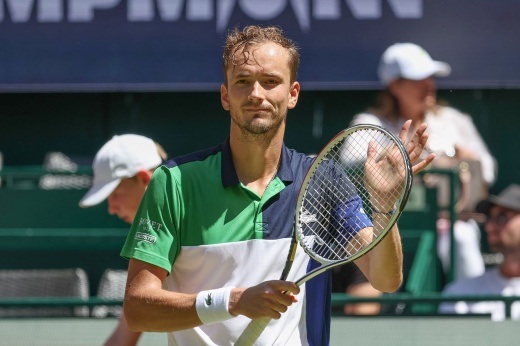 Medvedev beat the Belarusian for the second time in a week. Daniil again in the 1/4 finals of the tournament on grass

The Friday program of the day was opened by Karen Khachanov, who was opposed by the 51st number of the world classification, the German Oscar Otte, who received a special invitation to participate as a semi-finalist of the previous week (Stuttgart). It should be noted that Oscar knocked out the fourth seeded Denis Shapovalov there, and in the semifinals he competed on equal terms with the future champion Matteo Berrettini, losing only in two tie-breaks. Now 28-year-old Otte is at his highest place in the rankings, and you can see how comfortable he feels on the grass. In Halle, the German has already managed to knock out two difficult opponents from the grid – Serbian Miomir Ketsmanovich and Nikoloz Basilashvili from Georgia, who removed the Russian Rublev from the path.

Otte and Khachanov had not met each other before, and it took some time for the tennis players to adapt to each other’s style of play. At the end of the first game, Karen managed to catch the opponent on a couple of mistakes on his serve, make a break and submit for a set – 6:4 in 1 hour and 2 minutes. In the second game, the situation leveled off. Things quickly came to a tie-break, where Oscar turned out to be a little more successful – 7:6 (7:5). At the beginning of the third installment, a doctor was called to the German about some problems with his shoulder. But in general, this did not affect his game in any way. Karen still, taking into account the starting game, could not realize the break points for the second time, which he had accumulated nine in the match. But the only chance was enough for the German, which he took advantage of and brought the fight to a strong-willed victory – 4:6, 7:6, 6:4 in 2 hours and 11 minutes.

Thus, the potentially expected Russian semi-final in Halle – Medvedev – Khachanov was not destined to take place thanks to the efforts of Otte. Yes, and no one has yet guaranteed Daniil Medvedev a victory in the 1/4 finals, because the Spaniard Roberto Bautista-Agut, who is one of the ten tennis players to whom the Russian most often lost, got into his rivals. Curiously, in February of this year, Medvedev revealed who is his most uncomfortable opponent: “Who can I name? Bautista-Agut. I don’t know if I should say this. But this is basically true. I don’t like playing with him.”

Tennis players to whom Medvedev most often lost in his career:

Note that before Halle 2022, Daniil had no victories at all in meetings with Roberto – he lost all three of their previous fights – in Chennai 2017, Cincinnati / New York 2020 and Miami 2021. We add that all the matches were held before on hard, but on the grass the paths of tennis players have not yet crossed. Medvedev is now in an unusual situation. He planned performances on a bunch of three grass tournaments – Hertogenbosch – Halle – Mallorca, but at the main grass tournament – Wimbledon – the first racket of the world will not be able to perform, like other representatives of Russia and Belarus. And Daniil, according to him, is even to some extent convenient – he plays without brakes, not thinking about the Grand Slam tournament: “In a sense, it’s even easier for me. In my opinion, playing on grass is physically very difficult. Of course, there is a free week between Halle and Wimbledon, and this should be enough for recovery, but you always keep in your head: “What if I play five three sets and end with a three-hour final?” Plus you can lose, lose confidence in yourself before Wimbledon. You play with your thoughts about Wimbledon all the time. Now I don’t have it. I’m playing this tournament and it’s the only one that matters. I want to earn as many points as possible and I don’t think about how to come to Wimbledon in the best shape.”

Before the match with Bautista-Agut, the 1989 Roland Garros semi-finalist Andrey Chesnokov noted in an interview with the Championship that Daniil is now in excellent shape: “Medvedev is now in a crazy shape, and I don’t even know what can stop him. In the next round, he may meet with Bautista, and I will say that the Spaniard is a very uncomfortable opponent for Daniil, because he has already lost to him. I remember how last year they played at the Masters in Miami, I watched that match, and Medvedev could not oppose Bautista, although he had chances, only he could not convert them. 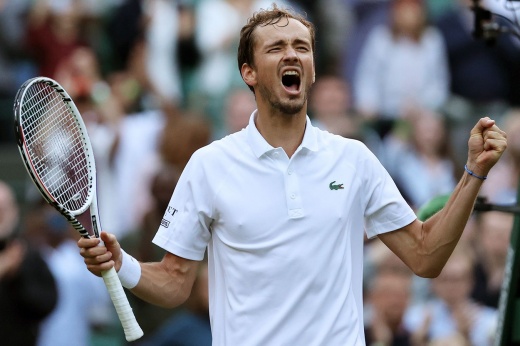 Medvedev’s second entry to the summit. How long will Daniel hold out there now – we understand

Medvedev’s match with Bautista-Agut in Halle turned out the way it should be – viscous, stubborn. At times the game was like a clay game with long rallies and long runs. The Russian really wanted to win, and he fought for every ball. And when beautiful drawings were held, Daniel turned to the public for support in the form of applause. Already in the opening game, Medvedev reached a break point, but did not convert it. In the fourth game, Roberto already missed the same opportunity – 2:2. And then the Spaniard began to make a little more mistakes, once the rope helped the opponent, and in the end Bautista-Agut made a double and allowed Daniil to take the lead with a break – 3:2. This success inspired Medvedev, and in the same breath he took three more games in a row, and with them the first game – 6:2 in 41 minutes. In the second set, Roberto had many chances to take someone else’s serve, but at key moments, Daniil managed to sharply add and win back all the opponent’s attacks. Well, the Russian himself took advantage of the only break point in the seventh game – 4:3 and brought the match to victory – 6:2, 6:4 in 1 hour and 26 minutes.

That’s how Daniil Medvedev reached the second semi-final in a row, beating his most uncomfortable opponent. On Saturday, the Russian will meet with Oscar Otte and try to get even for Karen Khachanov.