The first day of the European Championship and immediately the most powerful sign! Slovenia vs Lithuania is a dish that is hard to get enough of. All the time I want more and more. And if you remember that in 2020 these teams have already met in the final match for a ticket to the Olympics, it will become quite interesting. Then the match was held in Kaunas with crowded Lithuanian stands, but Luka Doncic, with the help of his magic, put a fat cross on the plans of the Baltic team.

The rights to the video belong to FIBA ​​Basketball. The video is available on the FIBA ​​YouTube channel.

Actually, the match in German Cologne almost repeated the entourage of the game two years ago. The thing is that the fans of the Lithuanian national team were in the numerical majority and even from the warm-up they made it clear that their guys can feel at home.

Slovenes, by the way, were definitely not given home hospitality. And this is not about the fans, but about the organizers who forgot to send a bus to the team’s hotel. As a result, the entire delegation of the reigning European champions had to hurriedly order a taxi and go to the arena in small (compared to two-meter basketball players) cars.

But in the warm-up everything was already as it should be. The stands greeted Slovenia with a whistle, but such attention always amuses Luka Doncic in a good way. The Dallas Mavericks star is accustomed to having his fans bubbling over his incredible hits. So in the very first possession, number 77 in a corporate leisurely style was left one on one against the hefty Jonas Valanciunas and scored a three-pointer on a high trajectory.

A smile (or a slight smirk) did not leave the face of the leader of the Slovenian team. The head coach of the Mavericks, Jason Kidd, who flew to Germany to personally observe the actions of his main and most expensive (in every sense) basketball player, smiled a little more modestly. 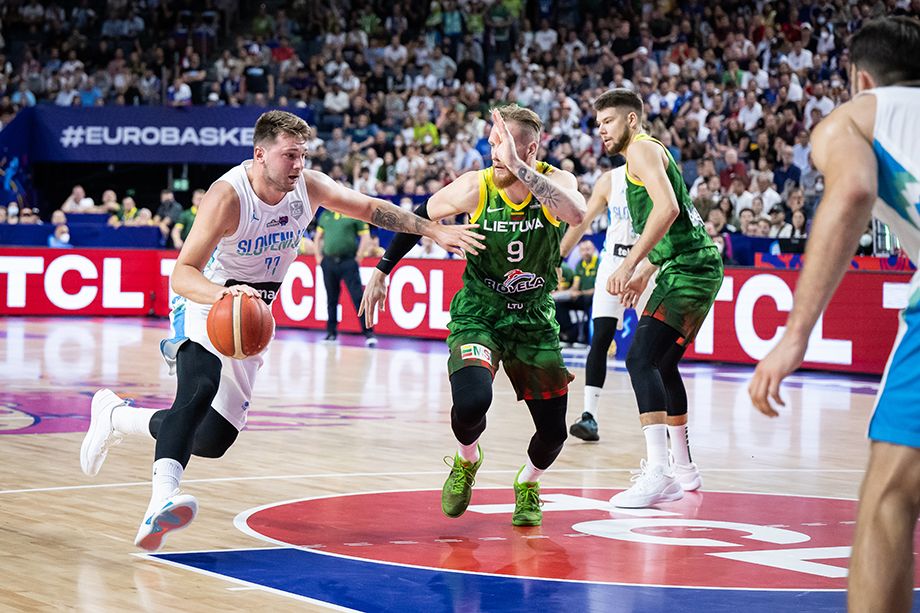 The Lithuanians in the first minutes seemed to be paying too much attention to Doncic, forgetting that the point guard was superbly handing out passes to partners, pulling several opponents over. Such hyperactivity backfired on the Baltic team with five long-range hits out of seven attempts. And if it were not for the effective actions of Lukas Lekavičius, who gave an excellent segment in the middle of the first ten minutes, then the difference could well have become double-digit.

The second quarter again confirmed the two most important theses about the Slovenian national team: the team absolutely does not depend on the mood of the leader and fantastically uses safety nets to protect the “paint”. Every time the Lithuanians brought the ball to Valanciunas or Sabonis, there were two or even three defenders of the opponent next to them.

The fantastic lightness and freshness of the ex-players of Russian clubs caught my eye. Mindaugas Kuzminskas and Marius Grigonis played for Zenit and CSKA respectively until February, and then they packed up and the season ended for them. Such unpaid leave benefited both. At the very least, they were definitely the best in their team in terms of the level of influence on the game on both sides of the court.

The main episode before the big break was a blow to the face of Doncic. The Slovenian swung on the arc of Valanciunas and he, trying to knock the ball out, hit it with a hefty palm. The arbitrators watched the episode, but did not see an unsportsmanlike foul. Luka punished the Lithuanians already in the next attack in the signature pass with sticking on the last step — 39:33. 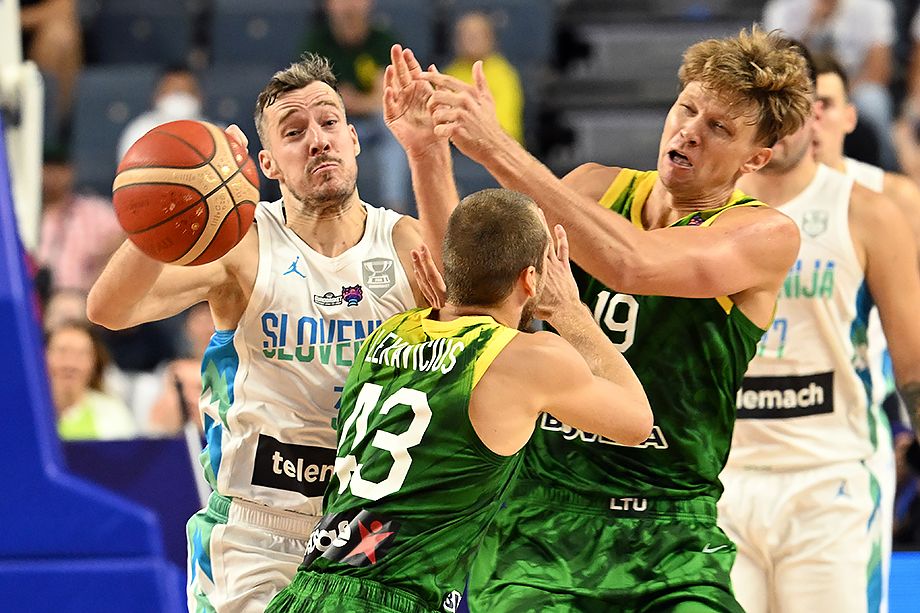 The basketball performance continued after a 15-minute rest. Parma’s ex-coach Kazys Maksvytis successfully defended in several attacks in a row, and Marius Grigonis broke out with five points in a row. For a second, it seemed that some kind of fatigue appeared in the actions of the Slovenes. They tried to simplify the game, while the opponent blocked all the lines for the transfer.

But it turned out that simplification is the surest way for Alexander Sekulich’s team, who signed a contract with Lokomotiv-Kuban even before the EuroBasket and will come to the VTB League after the tournament. Quick passes right under the basket, where Čančar and Toby were already ready, again filled the eyes of Slovenian players with life.

Doncic was far from his best games, but did his best in the end. Even in the middle of the second half, he scored with both hands, as if demonstrating to everyone that he was ready for such feats. Well, in the end, it was Luka who became the author of several assists at once, after which the team received important (and true) points from under the ring.

For 1:50 before the end of the fourth quarter, there was a key moment. Lithuania lost 81:86 and was on the attack. Sabonis received the ball between a three-second and a three-pointer. Doncic defended against him, trying to get as close as possible to the body of the central opponent. Domantas turned his elbows and tried to free himself some precious room for maneuver. It did not work out – the elbow of one of the leaders of the Lithuanian team hit Doncic in the face. The arbitrators after watching were unanimous – an unsportsmanlike foul. Luka scored both shots, again smiling at the crowd of Lithuanian fans, showing him the middle finger.

The final score is 92:85. On account of Doncic 14 points + 10 assists + 6 rebounds and the first victory for his team in the tournament. The next match of the reigning European champions will be held on September 3 against Hungary, and Lithuania will play against France on the same day.