The reigning NHL champion Tampa Bay Lightning got off to a rough start at the start of this year’s Stanley Cup final with the Colorado Avalanche. Jared Bednar’s team kept two games in Denver (4-3 OT, 7-0) and went away with a comfortable 2-0 lead in the series.

However, as late as in the Eastern Conference Finals, John Cooper’s team was already in a similar situation, when its confrontation with the New York Rangers also began with two guest defeats by lightning. After that, the owners of the last two Stanley Cups won four victories in a row and issued a ticket to the final series.

So this time, “Tampa” managed to win on home ice. The third match of the 2022 NHL Playoff Finals ended with a resounding success for the Lightning (6:2). As always, Tampa Bay’s Russian forward Nikita Kucherov was in the spotlight with two assists today, each of which proved to be a significant historical milestone for world hockey. 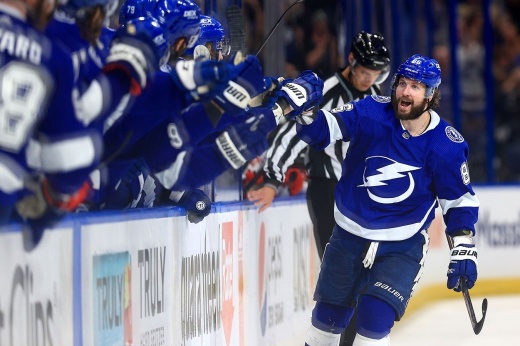 Tampa is alive, Kucherov is the best player of our time! The NHL Finals Show Continues

The first point scored for Kucherov was the 25th in the current playoffs. The 29-year-old forward became the fourth player in NHL history to reach a similar mark in the playoffs in three consecutive seasons. Wayne Gretzky (1983-1985), Mike Bossy (1981-1983) and Brian Trottier (1980-1982) were previously noted for this achievement. The second put him in first place among the current players in matches with 2+ points in the final series of the Stanley Cup. For the Russian, this is the seventh such match. He overtook Pittsburgh Penguins captain Sidney Crosby and Chicago Blackhawks forward Patrick Kane, who each have six such games in the piggy bank.

An important feature of the two assists from Kucherov was the time factor of the match. The Russian striker managed to prove himself at the key moment of the game. With the score 3:1 in favor of Tampa, the guests converted the majority, reducing the backlog to a minimum. For a moment, it seemed that before the “avalanches” the hope of saving the meeting was lit, but Kucherov instantly extinguished all intrigue in the match with two assists.

The effective actions of the Russian kept within 3 minutes and 23 seconds, after which the Canadian forward Corey Perry, already playing in the majority, forever entered his name in the history of the league, setting a phenomenal record, becoming the first player in the NHL who managed to excel in the playoff finals, speaking for four different teams. After the sixth goal against Colorado, everything became completely clear with the outcome of the match.

Perry is the first player in NHL history to score in the Finals for four different teams.

In the third period, Tampa came out with a margin of four goals (6: 2), at which point the Lightning coaching staff was probably already thinking about preparing the team for the next meeting. The main task for the last 20 minutes of the game was to complete it without injury. Did not work out. A few minutes before the end of the match, Kucherov, who played another brilliant match in this playoff, went to the locker room ahead of schedule, having received an unpleasant injury in the episode with Devon Teyvz.

The Russian striker himself opened the hunt for himself, with a score of 6: 2, deciding to check in with a power move against the Avalanche defender Josh Manson. The Canadian hockey player was close to the boards with the puck – and the Lightning star striker played the moment to the end, sending the opponent into the barrier glass. The main arbitrators of the meeting, Chris Rooney and Gord Dwyer, did not record violations of the rules in Kucherov’s actions, considering the forceful reception to be absolutely legitimate, which many North American journalists did not agree with.

“For this power move against Manson, Kucherov should have received a removal,” said Drew Livingston.

“Bad angle of showing the moment, but I’m just shocked that Kucherov was not removed for such a hit. But the judge saw everything, ”Jeremy Balan believes.

“It was a dirty hit from Kucherov. A very dangerous game indeed,” said Craig Needles.

The reaction of the Colorado players was not long in coming. Already in the next shift, the defender of the guests Teyvs dirtyly hit the Russian in the ribs with a club, as a result of which Nikita began to lose balance, his left leg gave way, and in this position he also flew into the board.

Only the Tampa Medical Headquarters currently has an answer to the question of what kind of injury the Russian received. On the one hand, he received a sensitive blow to the ribs, and on the other hand, his leg buckled in such a dangerous way that it was elementary to injure her. Teyvz received a two-minute penalty for his act, and Kucherov tried to stay on the ice and use the majority. The Russian striker was taken out for a throw when playing in the five-on-three powerplay – Kucherov clicked on the touch and instantly realized that this was the end for today. Bending in half, the Russian returned to the bench, slammed the gate and went to the locker room.

Given the score on the scoreboard and the amount of time remaining, it can be assumed that the Russian decided to save himself before the next match. But in any case, the Lightning coaching staff had a significant cause for concern. But today, again, Braden Point could not help his team, again dropped out of the Tampa team for medical reasons. If Kucherov is injured and continues to play through pain, the Lightning’s chances of a third consecutive Stanley Cup will be reduced.

Kucherov’s injury could not pass unnoticed by the nature of the match, and the fight between Ross Colton and Logan O’Connor fully followed from the logic of what was happening on the ice in the third period. Opponents with great enthusiasm began to beat each other, giving the fans a bright fist fight. The American from Tampa and the Canadian from Colorado exchanged a series of hits and went to the locker room, receiving a five-minute penalty each. Patrick Maroon and Andrew Colliano also went in the same direction, sorting things out with each other.

At the end of the third game of the Stanley Cup Finals, there was a bright brawl. Video

After the meeting was over, Tampa’s head coach John Cooper said that he really did not like Taves’s act, while not talking about Kucherov’s state of health. The Canadian specialist suggested that journalists wait until tomorrow, when he will have more information on this matter.

“Evaluate Teyvz’s actions? Listen. When you ask about something like this, you must understand that you are asking a question that everyone in this building knows the answer to. Nikita’s condition? Tomorrow we will see, now there is no information, ”Cooper said with anger in his voice.

In turn, the leading Lightning defender Victor Hedman called Devon’s actions frankly dirty. And it is impossible not to agree with him. But would Teyvs have played in this way if Kucherov himself had not attacked Manson earlier? This question also remains open.

The defender of “Tampa” – about Kucherov’s injury: it’s a dirty game