The third match of the series “Colorado” and “St. Louis” began as a real war not for life, but for death. In the third minute, Ivan Barbashev so stamped defender Sam Girard into the board that he broke his sternum and sent him to the hospital. The fighting continued – in the seventh minute, St. Louis goaltender Jordan Binnington was injured. 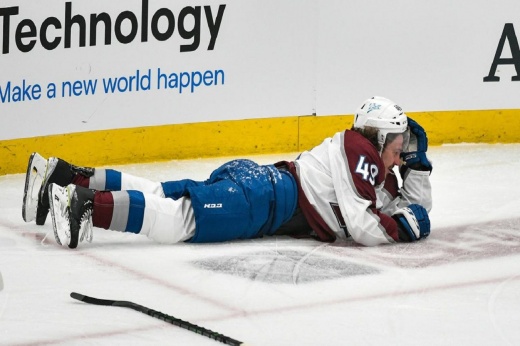 “Just crushed him.” Russian hockey player Barbashev broke the chest of a Canadian in the NHL

Artturi Lehkonen got the puck and shot from the entrance to the zone, which Binnington managed, but did not fix the projectile. Nazem Kadri rushed to finish off and, together with defender Kalle Rosen, crashed into the goalkeeper.

The collision turned out to be very tough – Binnington got up quite quickly, but it was noticeable that he felt out of place. Shaking himself off, he immediately went to his shift – this match was completed for him.

Opinions are divided about who is to blame for the collision. In St. Louis, they remember well how Kadri knocked out Justin Faulk in the head in the last playoffs, for which he received eight games (and the defenseman was out for the rest of the season), and they believe that it was he who was to blame this time. The reputation of being a dirty player runs ahead of him – there are countless suspensions, especially in the playoffs. “Look at his reputation. I have nothing more to say, ”said St. Louis head coach Craig Berube.

Binnington himself was so angry with Kadri that he threw a bottle at him when he was giving a post-match interview. In the broadcast, you could hear the sound of a blow, later the journalists confirmed this fact and even published a photo of the same bottle.

Kadri, who was greeted by the stands with an unhappy roar throughout the match, presented a different version of events. “The puck stayed in the game, I tried to reach it with a stick. I think the defender went across and pushed me, which led to a collision. If it wasn’t for him, I wouldn’t even have touched Binnington. I hope he’s all right. It looks like he just threw a bottle at me. But I couldn’t really do anything, I just ran to the puck.

From my point of view, there is nothing personal. I’m just trying to fight and win. If someone takes this to heart, then this is his problem. What happens on the ice stays on the ice. I’m just a fighter. I want to win,” he said.

In North America, most neutral journalists this time also took the side of Kadri and did not understand why it was necessary to throw a bottle.

“Absolutely clown act of Binnington. And completely in his spirit. There should be a disqualification for this, ”wrote journalist Andrew Schnittker.

The result for St. Louis was disappointing. Binnington’s injury radically changed the game – the “musicians” led 1-0, but conceded a couple of minutes after the change of goalkeeper at Villa Husso, and eventually lost with a score of 2:5. Now the big question for them is how serious Binnington’s injury is.

The hero of the 2019 winning season for St. Louis has not shown a reliable game for the last two years, this season he played even less than Husso, and he generally started the playoffs in reserve. But, having left the fourth match of the first round with Minnesota, he began to show excellent hockey – he won four out of five matches, took the lead in the playoffs in terms of reliability coefficient (1.72), and was inferior to only to Jake Oettinger. Binnington is still being examined, his status is still unknown.