Russian defender put on the ears of the Americans! Kulikov drove the puck a second before the siren 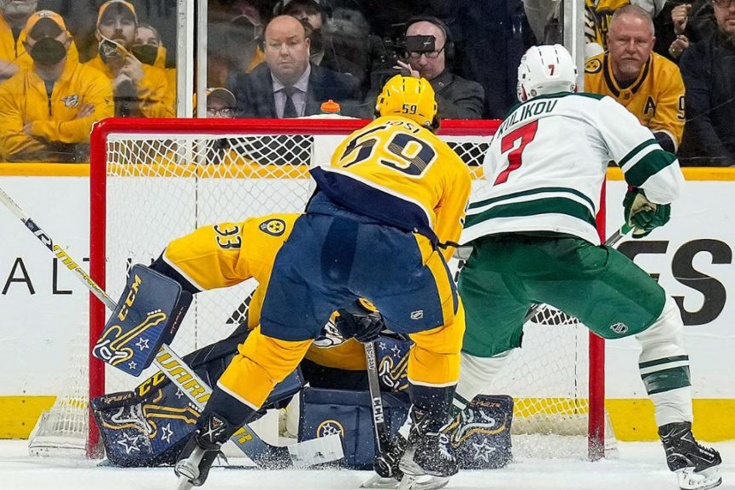 Minnesota and St. Louis continue an exciting correspondence battle for home court advantage in the first round of the Stanley Cup. Today, the teams almost simultaneously played away matches in Nashville and Anaheim.

The Blues had an unsuccessful start of the game with the Ducks, conceding two quick goals, but managed to rectify the situation in the second period.

Once again, the Russian forwards of the “musicians” Tarasenko, Buchnevich and Barbashev were at their best: they all scored a goal, scored seven points for three and helped their team ruin the holiday for Anaheim legend Ryan Getzlaf, who ended his glorious career with this match.

Tarasenko exchanged his ninth dozen points this season and extended his hitting streak to 10 matches. And for the first time in his career, Buchnevich reached the mark of 30 goals in a season after such a gorgeous throw from the face-off circle.

In a parallel meeting, Minnesota also had a hard time in a duel with the Predators fighting for a place in the playoffs. Both teams, to the delight of the audience, staged a real scoring shootout: Bjugstad opened the scoring, Forsberg equalized, Eriksson Ek again brought the Wild forward, Duchain restored the balance.

Soon, Johansen gave Nashville the lead for the first time, but Eriksson Ek, with the help of Kirill Kaprizov, scored a double, scoring on the power play. The Russian leader of the “savages” gave the 57th assist of the season in the fall.

In the future, the teams exchanged goals once more and went into overtime, which was goalless for 4 minutes and 58 seconds, but Minnesota managed to draw a winning combination on the flag itself!

The protagonist of the match, Eriksson Ek, won a tough fight for the puck against the Predators player, crawled into the opponent’s zone on the left flank and managed to pass to the center, where Russian defender Dmitry Kulikov was already rushing at full steam. He got the puck, moved a little towards the goal and flashed David Rittich with a wrist throw, literally putting on the ears of the American commentators who worked at the match!

The Wild pulled out the win with 1.3 seconds left in extra time – an amazing denouement! By the way, Kirill Kaprizov also took part in this puck, who increased his personal score this season to 103 (45+58) points.

Thanks to this hard-won victory, Minnesota remained in second place in the Central Division, not allowing St. Louis to overtake them. In addition, the “savages” have one more game in hand. As for Nashville, the Predators earned an important point for a regular-time tie, maintaining a four-point lead over the non-Cup ninth place currently occupied by Vegas.