Recently released Return to Monkey Island. This is a continuation of the cult series of quests, which in 1990 changed the gaming industry. Critics and gamers praise the new product – but should you spend time on it?

The Greatness of Monkey Island

Released in 1990 The Secret of Monkey Island made a revolution – primarily visual. The iron of those times reproduced only 16 colors, and it was not easy to adequately dispose of such a palette. Usually, artists simply painted carpets, cabinets, mountains and any other objects with one color. Because of this, the picture was often unpleasant.

However, the authors of The Secret of Monkey Island came up with a different technique. When painting the model, they alternated pixels of different colors – as a result, a combination of, for example, blue and yellow gave rise to a new shade. The idea is simple, but this has never been done before. That is why the visual shocked. 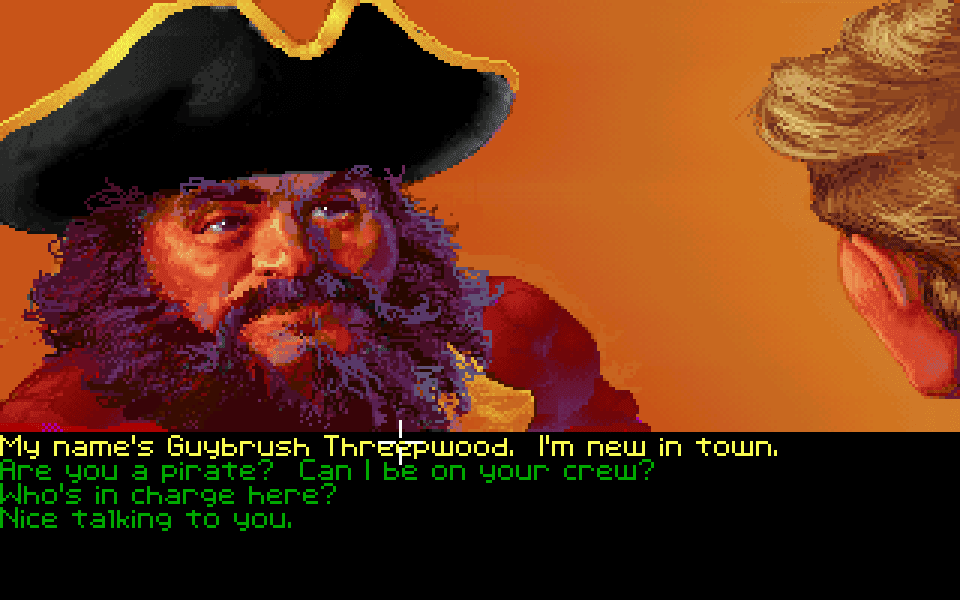 In addition, earlier quests were a hardcore genre. You had to control the hero through text commands – if you wanted to grab a stick from the ground, you had to go up to it and type “pick up”. But synonyms like “take” might not fit, so sometimes gamers sorted out words for a long time.

In The Secret of Monkey Island, a command system appeared at the bottom of the screen, where there were all available options. Now players could not print, but simply select the desired option. The beginnings of this mechanic were in other quests, but it was in Monkey Island that it acquired its final form. 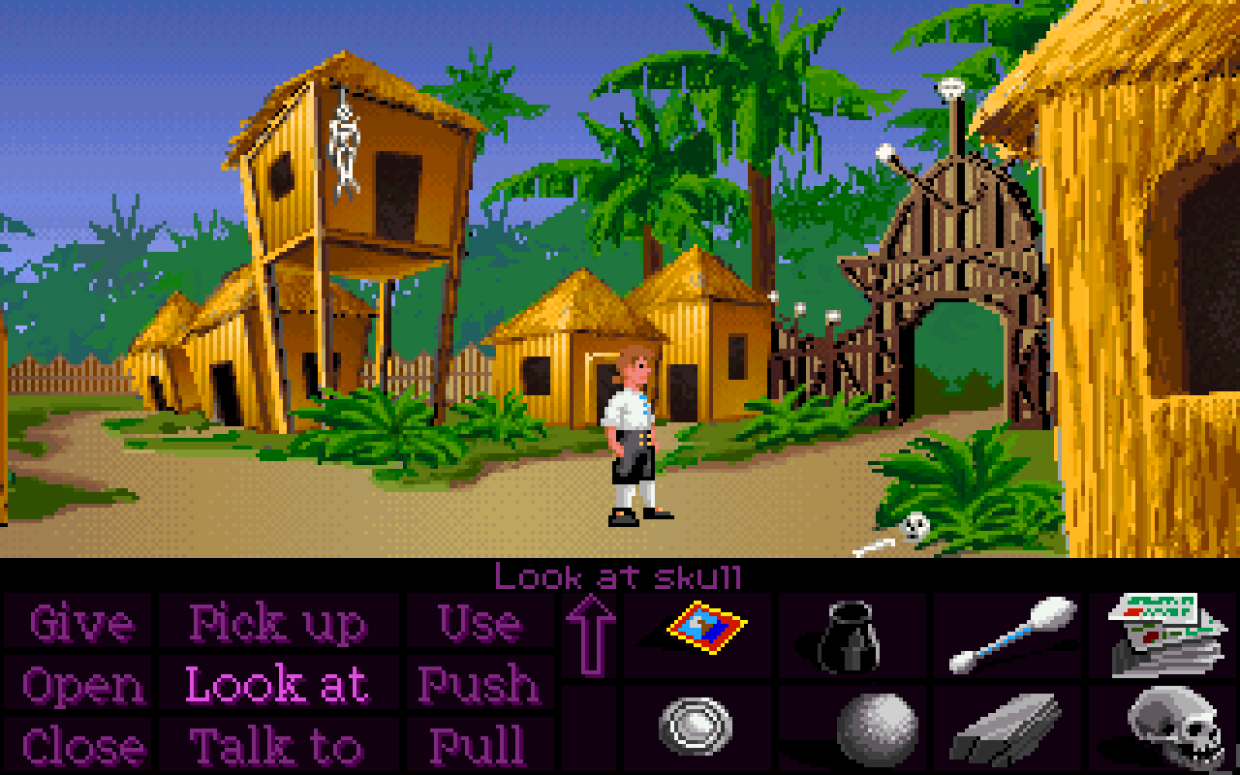 The Secret of Monkey Island is called the first convenient quest

Considering that there were enough other features in the game, it became, as expected, great. Alas, over time, interest in quests faded, and the series, starting from the third part, forgot about the roots and upset the fans. Fortunately, in 2022, the opportunity to return to Monkey Island appeared – but is it worth it?

This is not the island

Games are greeted by clothes – here Return to Monkey Island is upsetting at first. I caught the first part and remember the charming pixelated visual. The skill of the artists was enough to make The Secret of Monkey Island look cool even now.

But you can’t say the same about Return to Monkey Island. It seems that everything is drawn nicely, but it is not possible to get rid of the feeling of everyday life. The series seems to have lost its face. 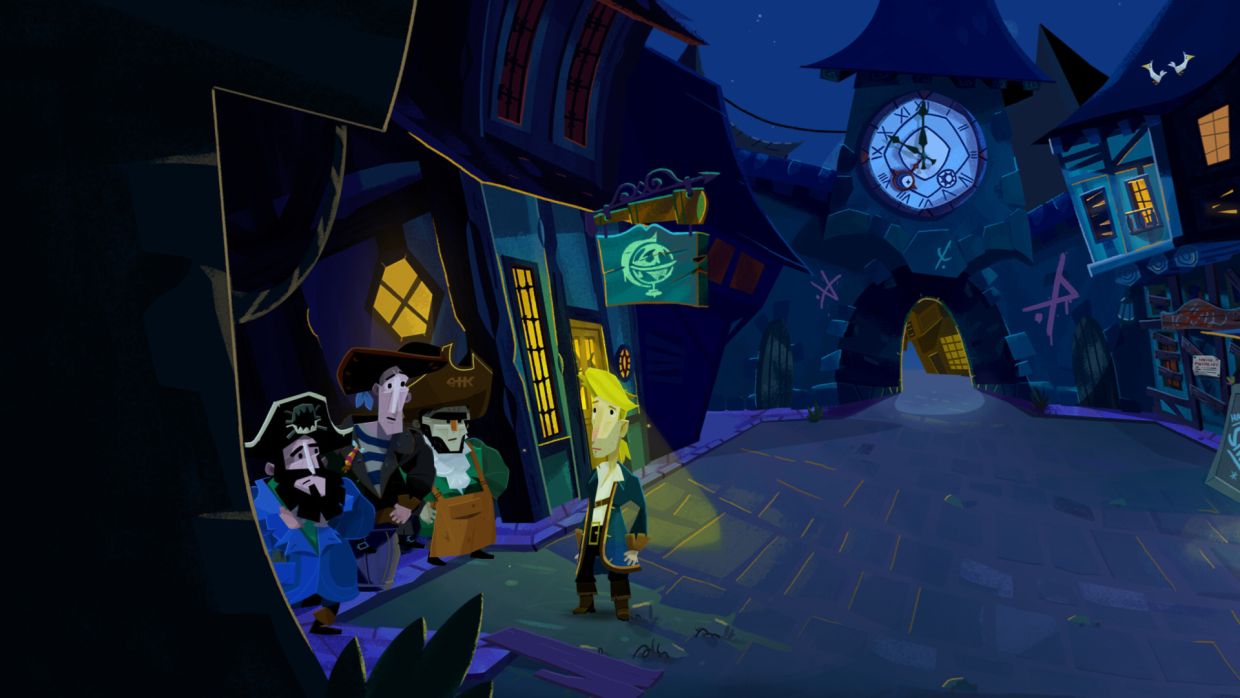 However, it is worth overcoming skepticism and forgetting about nostalgia, as the picture of Return to Monkey Island will begin to fascinate. The locations are always full of detail, each area is drawn in a unique style, and the color scheme is soothing.
As a result, over time, being on Monkey Island becomes pleasant. And when the developers themselves begin to ridicule the change in style, there is no thought left to criticize the game. 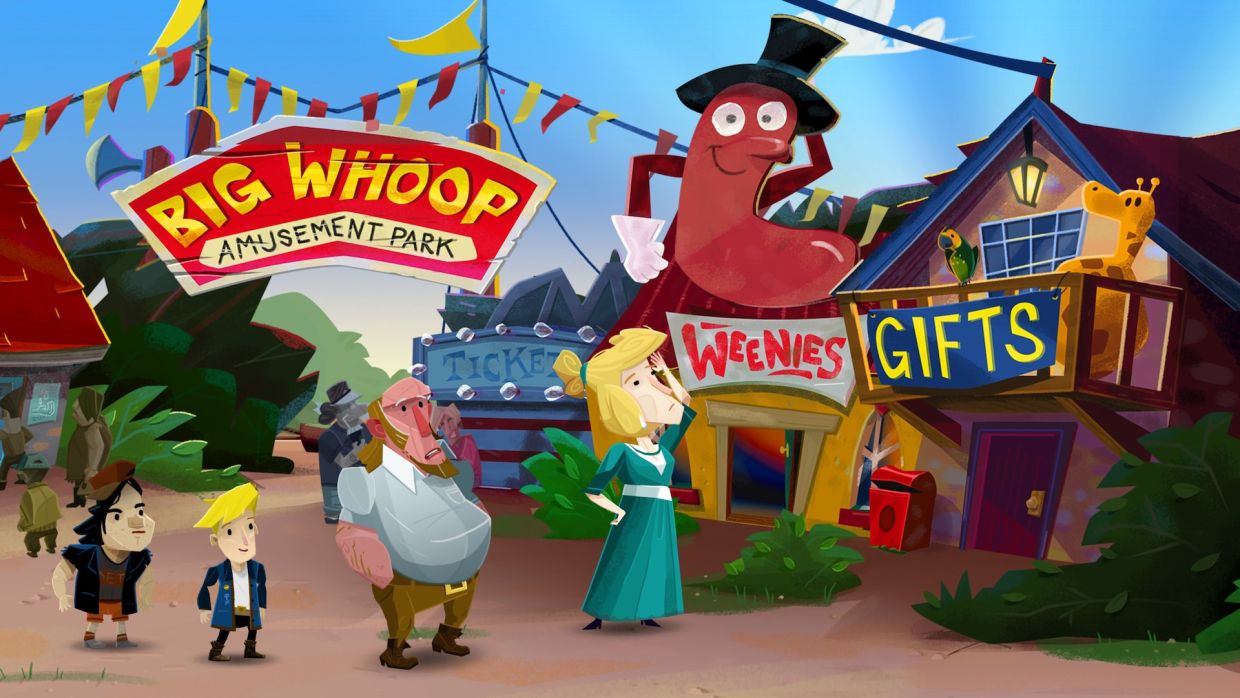 We learn about the childhood of the hero

After the announcement, the Return to Monkey Island visual was scolded, but in reality everything is fine with it. Just give the authors a chance – then a pretty world will appeal to you.

The plot of Return to Monkey Island is banal. Guybrush Threepwood spent a lot of time on Monkey Island, but never revealed its main secret – this thought haunts the hero. In addition, he finds out that the sworn enemy LeChak is returning to the island – the pirate ghost has already found the ship and assembled a team. Then Guybrush also sets off.

However, the trick is not in the story itself, but in how the authors tell it. The path is full of charismatic characters, great jokes, and all the obstacles are extraordinarily cute. 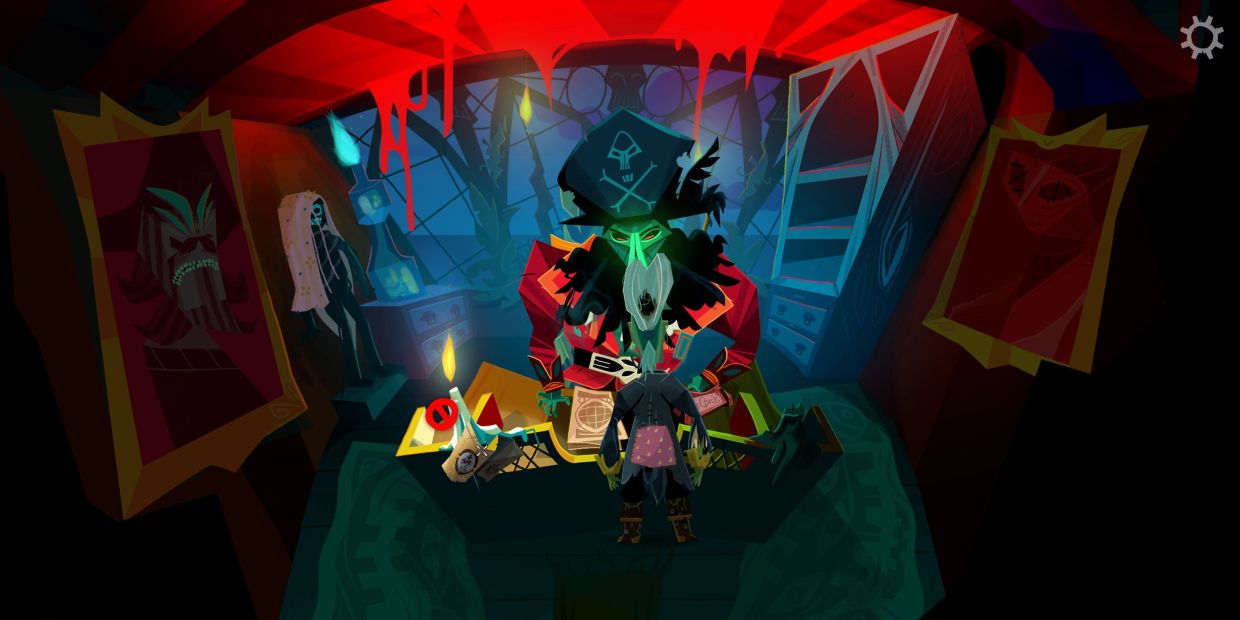 For example, once Guybrush tries to get into LeChuck’s ship, but he is not allowed. The skeleton guard digs through the documentation and finds a list of people who are denied entry. The list consists of one picture, on which the main character is drawn. To get on board, you have to find a monster mask and pass for your own. It seems to be nothing special, but thanks to the dialogues and jokes, the smile does not leave the face.

However, there is also a problem. The developers said that it is not necessary to know the original source – in general this is true, but without understanding the original, you will not get half the fun. The authors not only return Guybrush to a familiar island, but even copy scenes from the first part.

At the beginning of The Secret of Monkey Island, Guybrush met with an old watchman. The hero introduced himself and said that he wanted to become a pirate. In the novelty, he finds the same person in the same place, and then descends into the streets that the olds walked 32 years ago. Old acquaintances are also in place – when they meet, they will definitely remember the old days.

Of course, there is a tab in the menu where the authors talk about the key events of the past parts, but this is not enough. It’s good that you can go through the first two parts with convenience – in 2009 a good re-release was released. 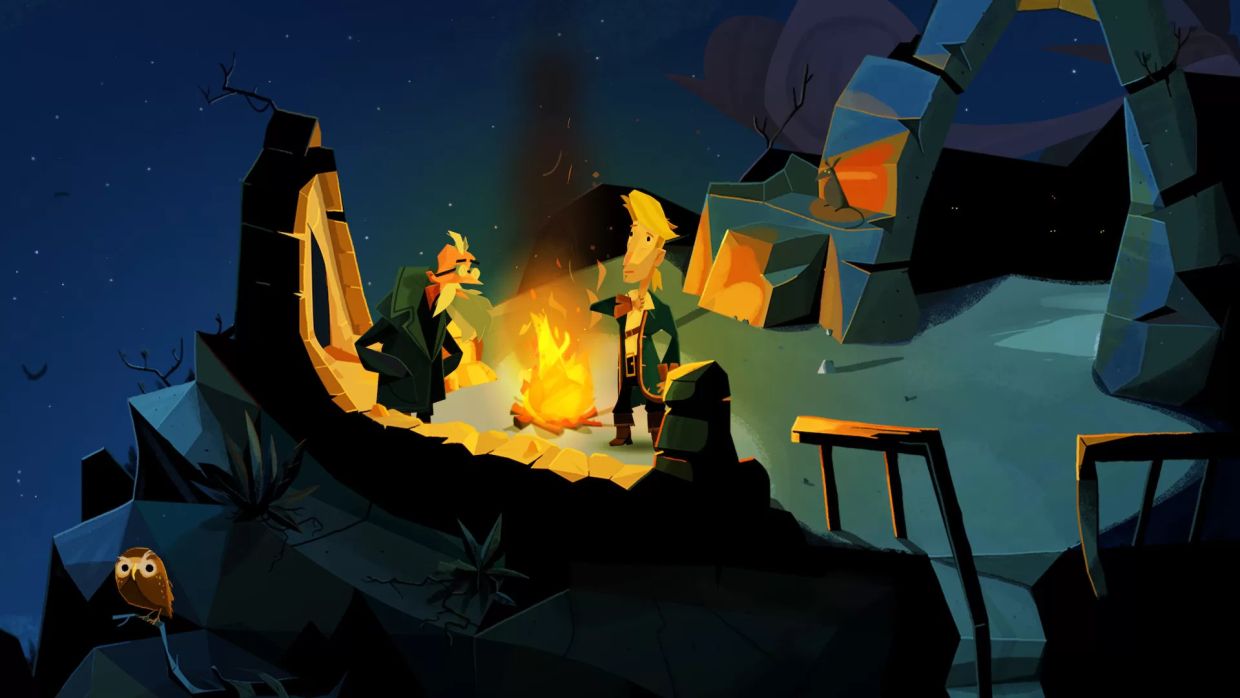 You can also plunge into Return to Monkey Island from scratch – after all, the game is full of advantages. However, imbued with enmity with LeChak and fully understand the chip of the ending will not work.

Return to Monkey Island is a classic quest. The hero wanders around the locations, collects useful items, combines them, solves riddles and talks a lot. There are few innovations, but the familiar formula still works.

It is curious that the novelty has two levels of difficulty. On the standard you can easily run through the game and never stumble. In any incomprehensible situation, you can look into the magazine and read a detailed hint. But on high difficulty, the authors only subtly hint at what needs to be done – as a result, you can sit on the puzzle all day. This is a convenient system, because you yourself choose the goal: to have fun or challenge your own ingenuity. 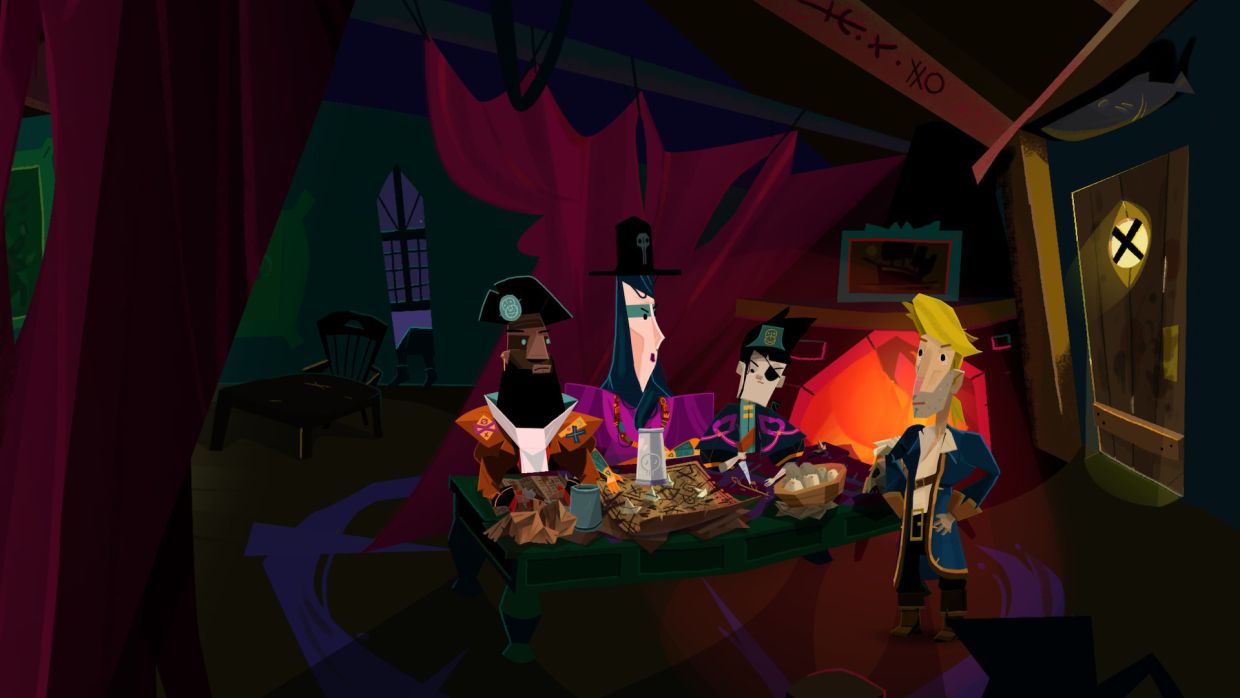 Other improvements include running and highlighting active objects. As a result, the gameplay does not tire with slowness and does not force you to engage in pixel hunting.

However, the run would not have had to be celebrated if there were not so much backtracking in Return to Monkey Island. The problem is especially depressing in the later stages of the game, when the authors frankly stretch the timing. Luckily, the characters don’t stop joking, and the visuals are still soothing.

Another problem is related to control through the gamepad – it is not easy to play the game with it. To get to the active object, you need to come up close several times and hope that it will finally be highlighted. The mouse is enough to click on the desired place. For the same reason, the Nintendo Switch has to use the touch screen.

Otherwise, Return to Monkey Island is an amazing quest. You can only complain about the little things. 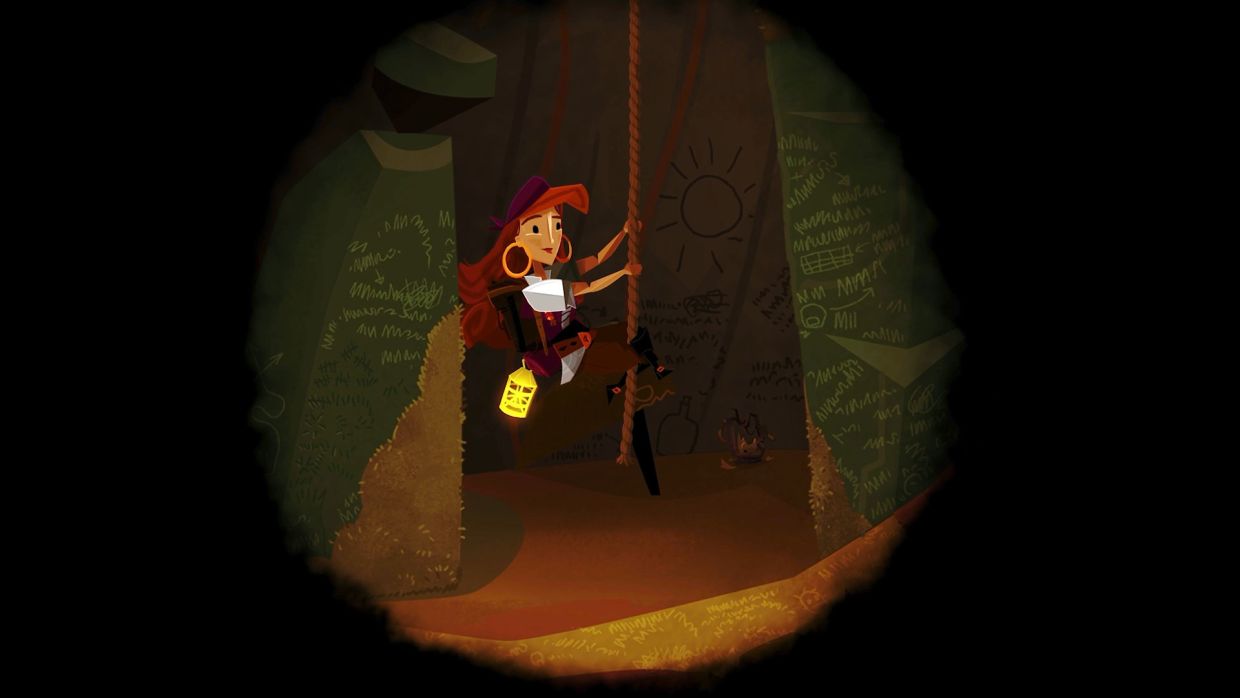 The secret of Return to Monkey Island is that it was created by the authors of the original. Lead game designer Ron Gilbert, music composer Michael Land, Guybrush’s voice actor – these people are back. They proved they still love the series and gave it their all. The result is an almost perfect quest that will appeal to both fans of the genre and beginners. 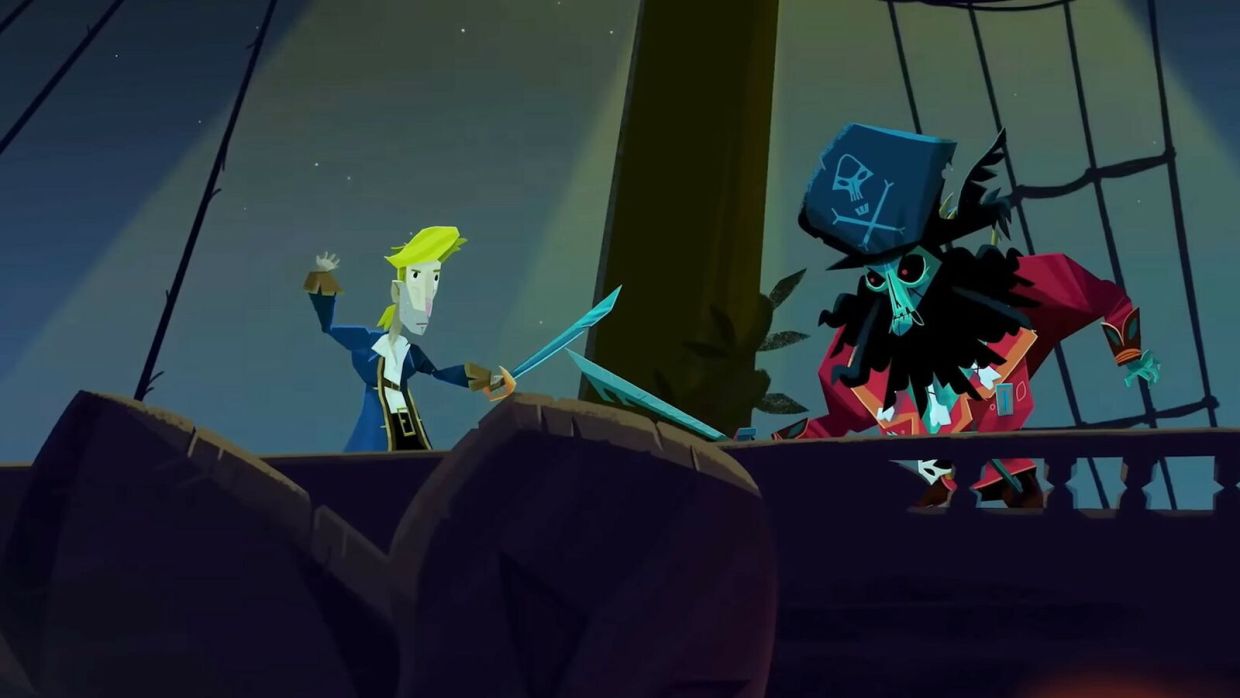 Return to Monkey Island is now out on Nintendo Switch and PC. Officially, the PlayStation and Xbox versions have not been announced, but this will certainly happen in the foreseeable future. 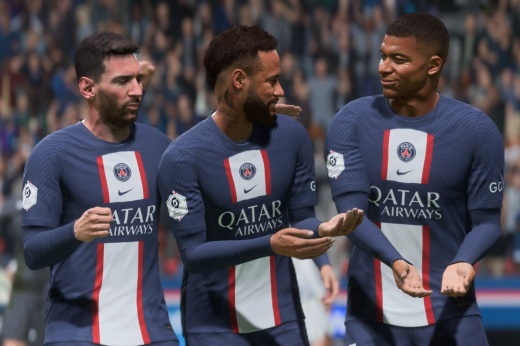