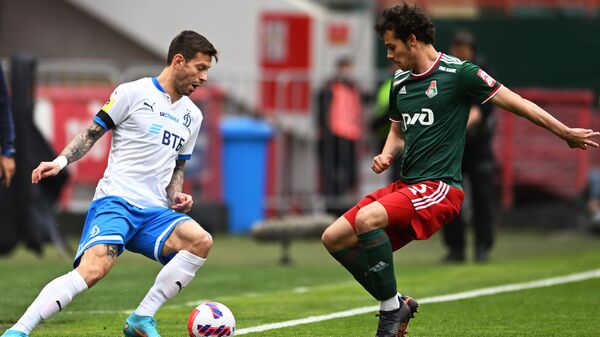 Dynamo tied with Lokomotiv and returned to second place: video of goals

MOSCOW, May 14 – A video review of the match of the 29th round of the Russian Premier League (RPL) between Lokomotiv Moscow and Dynamo was published on the social networks of the Match TV channel.
The meeting ended in a draw with a score of 3:3. The scoring in the ninth minute was opened by the ex-forward of Lokomotiv Fedor Smolov, who took advantage of an inaccurate pass from the railroad goalkeeper Marinato Guilherme. In the 28th minute, the defender of the hosts Tin Edvay equalized the score by closing the pass from the corner of Nair Tiknizyan, but five minutes later, Arsen Zakharyan put Dynamo ahead again with a spectacular shot from outside the penalty area. In the 38th minute, Daniil Fomin converted a penalty and brought the advantage of the blue and white to two goals.
In the second half, Lokomotiv managed to recoup. In the 65th minute, Czech striker Jan Kukhta scored, and in the 72nd minute Girano Kerk sent the third goal into Anton Shunin’s goal.
After 29 matches, Dynamo ranks second in the RPL standings with 53 points, ahead of Sochi in additional indicators. Lokomotiv is in sixth place with 45 points. In the final round on May 21, Lokomotiv will play on the road with Krylya Sovetov, and Dynamo will play the silver medals of the championship at home in a full-time confrontation with Sochi.