Home News Toilet scandal in chess: what was the Russian Kramnik hiding from the...

Unification of the chess world

In 2006, the chess world finally united after a split in 1993. World champions according to versions of two different federations fought for the title.

On the one hand, there is the world champion in the classical branch, Vladimir Kramnik, who defeated Garry Kasparov in 2000 and hardly defended his title in 2004 in a duel with the Hungarian Pyotr Leko. On the other hand, one of the leaders of the world rating list is Bulgarian Veselin Topalov, who won a two-round tournament of all the strongest (except for Kramnik and Kasparov).

The Kramnik-Topalov unification match in 2006 was supposed to be hosted by Elista, the birthplace of the then FIDE President Kirsan Ilyumzhinov. According to the regulations, 12 games were provided, and in the case of a score of 6:6 – a tie-break in rapid chess. In fact, it was then that the modern format was used for the first time, in which Magnus Carlsen subsequently fought against Vishy Anand, Sergey Karjakin, Fabiano Caruana and Jan Nepomniachtchi.

Before the match, it seemed that Kramnik was in poor shape and was experiencing health problems – the Russian champion did not have major tournament successes. The Bulgarian, on the contrary, crushed all rivals in super tournaments left and right. His total dominance looked amazing, and there were well-known grandmasters who thought that Veselin’s play was very suspicious. Alexander Morozevich, a participant in the 2005 match-tournament, repeatedly stated about possible computer clues, and Nigel Short, a participant in the 1993 World Championship match, also supported him.

Short even had a major conflict with Topalov’s second Ivan Cheparinov – at the super tournament in Wijk aan Zee, the young Bulgarian defiantly did not shake hands with Nigel before the game and got zero for disrespect for the opponent (before the pandemic, refusing to shake hands before the game was severely punished according to chess rules) . True, then the manager of Topalov and Cheparinov, Silvio Danailov, one of the most powerful and influential heroes of the chess world of that time, the organizer of super tournaments in Bulgaria and the “godfather” of the ideology of the so-called “Sofia rules” intervened in the process – a ban on agreeing to a draw and playing until naked kings. As a result, the game Short – Cheparinov was outplayed on the day off, but the angry Nigel acted brilliantly and crushed his opponent.

But the match for the title in Elista turned into one continuous conflict. 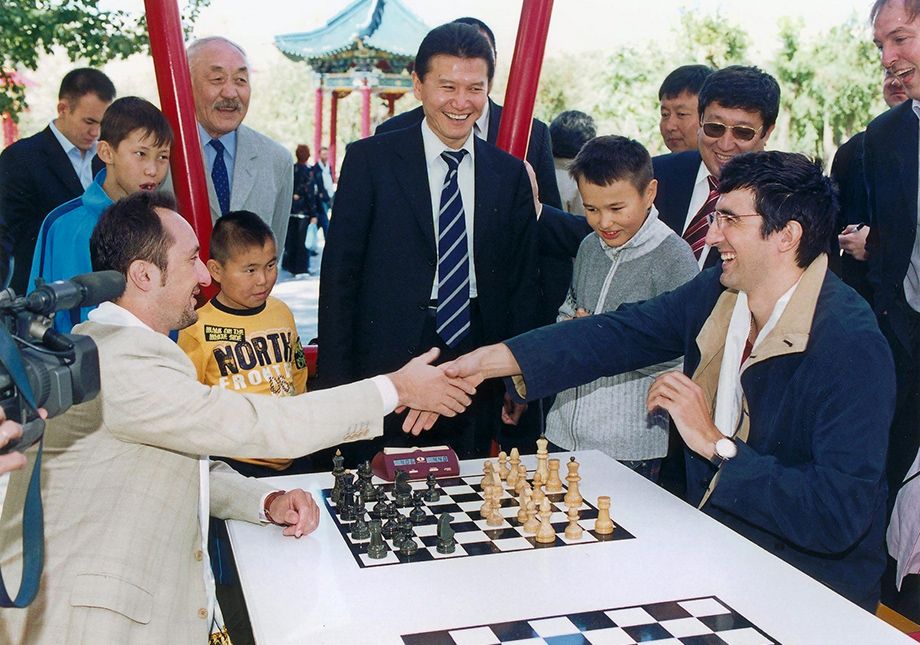 The opponents started the match as friends and ended as enemies. Danailov was looking forward to victory – in this case, the Topalov-Radjabov match was to take place in Baku soon with a huge prize fund, which was laid out by generous Azerbaijani sponsors. But the beginning of the match was discouraging for Veselin. In the first game, he really wanted to win, but went too far and was defeated. And in the second meeting, he didn’t give a forced checkmate at all, fell apart after that and again suffered a painful defeat.

Kramnik seized a solid 2-0 lead on points and began to act much more reliably – the next two games ended in a draw. And then a huge scandal erupted, which the world called toilet!

The fact is that Topalov’s team accused Kramnik of excessively frequent and lengthy visits to the toilet – the only place not subject to video surveillance – and sent a complaint to the Appeals Committee. Silvio Danailov expressed his suspicions that Kramnik, while going to the toilet, might receive computer prompts – they say that special services are helping the Russian champion in his native land. The rest rooms and toilets of the players were checked – nothing suspicious was found.

Chess players – in the women’s toilet!

The Appellate Committee was attended by the current head of the European Chess Union Zurab Azmaiparashvili and long-term FIDE eminence grise Georgios Makropoulos. Both people with a rather controversial reputation – the first even took moves back in tournament practice and somehow got into a fight at the closing of the Olympiad with security, the second – later betrayed Kirsan Ilyumzhinov, who trusted him, wanted to independently seize power in FIDE, but failed, losing the election to Arkady Dvorkovich.

The Appeal Committee ruled that the Bulgarian side overestimated the number of times Kramnik went to the toilet (according to Danailov, he ran there almost every 5-10 minutes), but admitted that it was indeed unusually large, and decided to close the participants’ private toilets, opening one common ( and, as it turned out, female). This decision was considered by Kramnik to be in violation of the match contract and insulting. As a sign of protest, the Russian did not show up for the fifth game, and he was credited with a forfeit loss.

Kramnik expressed no confidence in the Appeal Committee, demanded to change its members, reopen private toilets and replay the fifth game. The match was in jeopardy. The fact is that at that moment Ilyumzhinov was absent from Elista – he was at a meeting of the heads of regions of the Southern Federal District of the Russian Federation chaired by President Vladimir Putin. And immediately after it ended, he rushed home to save the match.

Ilyumzhinov changed the committee and sorted out the toilets. The Bulgarian side, after a conversation with the president, tempered their ardor and withdrew their demands, adding, however, that, in their opinion, Kramnik’s play in the second game remains extremely suspicious at a number of points. 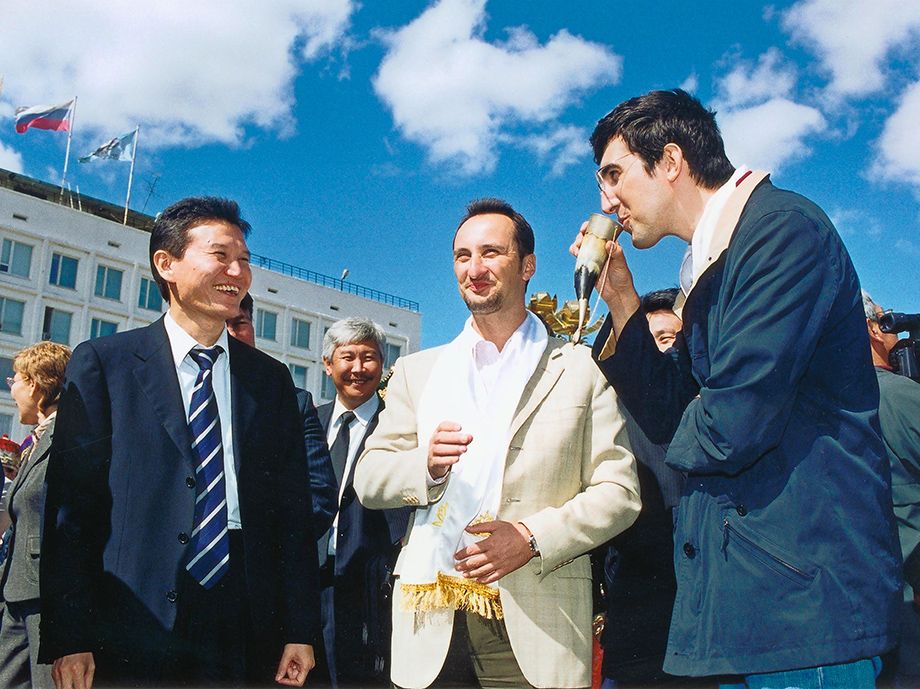 The key question remained – what to do with the fifth batch? The Russian threatened to sue FIDE, his position was supported by ex-world champions Vasily Smyslov and Anatoly Karpov. But formally it turned out that Vladimir did not file an official protest at the time of the fifth game, and Kirsan Ilyumzhinov with the new Appeal Committee, after consulting with lawyers, declared that Kramnik lost the fifth game, and the match would continue with a score of 3:2.

After such a generous gift, Topalov went on the offensive and seized the initiative. And the atmosphere continued to be tense – the rivals stopped all communication, and their managers exchanged mutual accusations in the press. Having won the eighth and ninth games, the Bulgarian took the lead – 5:4, and it seemed that only a miracle could save Kramnik now.

And at that moment the two-meter Russian hero was resurrected! Vladimir bounced back in brilliant style – 5:5! This was followed by two tense draws, after which the match went into the first ever tie-break.

Kramnik took the lead, but Topalov immediately bounced back! 1.5:1.5, and it seemed that the whole chess world was clinging to the screens, watching the game, which was supposed to reveal the absolute champion. Kramnik was calm and self-confident – he literally crushed his opponent, and the Russian’s hand did not flinch during the implementation. There is a victory! To celebrate, Vladimir did not even sue over the fifth installment.

However, the end of the match did not end Topalov’s confrontation with Kramnik. The Bulgarians demanded revenge, promising to hold it in Sofia with a record prize fund. But Kramnik answered quite sharply:

“I would love to play a match with any truly worthy opponent… As for Topalov personally, as a chess player I would be interested in playing a match with him. And as a person, I have absolutely no interest in meeting him. Topalov is a brilliant chess player and a worthy opponent. But as a human being, I perfectly understand that if such a match happens again, then there will be even more provocations from Topalov’s team. I have no great desire to experience once again what happened in Elista – the rudeness that came from Topalov’s team. I am a chess player, I like to play chess, and not to engage in some kind of dirty wars around chess. Therefore, in human terms, I have no desire to play with Topalov!”

As a result of undercover intrigues, Topalov was not included in the 2007 match-tournament, which was won by Vishy Anand, who then defeated Kramnik in the match for the world crown. Now it was Danailov and Topalov who threatened FIDE with a lawsuit – as a result, Veselin was then allowed to play the final match of the candidates with Gata Kamsky and, after the victory, to hold a championship fight with Anand, where the Indian grandmaster won in a dramatic and tense struggle. 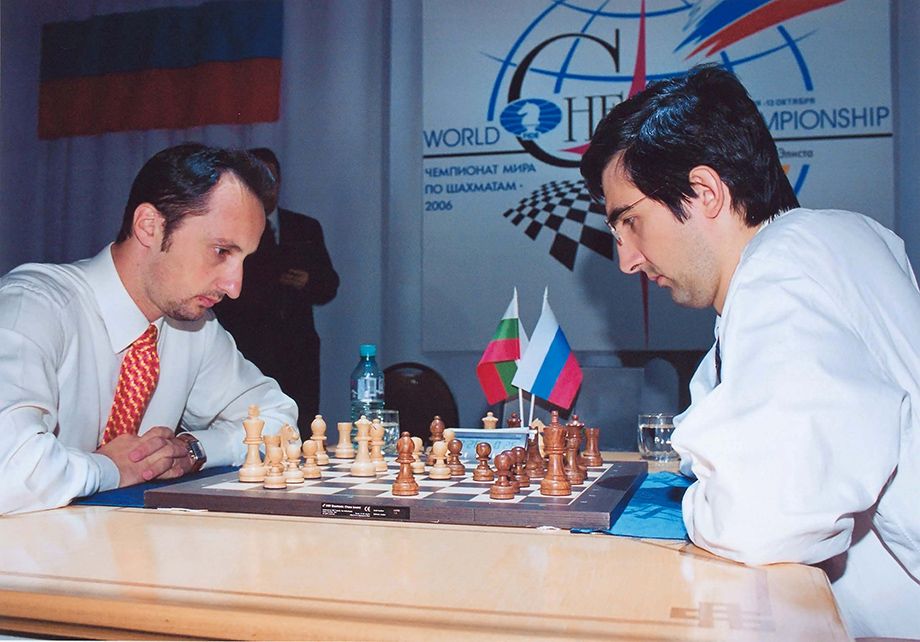 So what did the Russian do in the toilet?

Many years later. Kramnik has already retired, while Topalov plays extremely rarely. However, these two super grandmasters still hate each other and do not shake hands when they meet. It is unlikely that their relationship will ever improve.

But one question remained. Why did the Russian so often run to the toilet?

There is a popular version in the chess world that Vladimir Kramnik lit up a cigarette in the nerves of everything that was happening. And he went to the toilet to hide it from his fiancee, the French journalist Marie-Laure Germont, whom he signed two months after the end of the title match.

However, great champions tend to keep their secrets, and it is not a fact that we will ever know for sure what happened then in the Kalmyk toilet.