Manchester United are paying Ajax €57m and €10m in bonuses. The amount of about € 60 million – this was the original requirement of Amsterdam. Yes, this is the best player of the club last season. But why did Manchester United go for this deal? Martinez is already in ninth place in the list of the most expensive purchases.

Eric ten Hag drew a line under the transfer: “He is a warrior, I think the fans will admire him – his attitude, fighting spirit. Lisandro brings aggressiveness to the game, in a good way. We need it. In addition, he is also skilled, knows how to handle the ball, and he is also left-handed. He knows some of my ideas and this is his advantage. But he also has to adapt to a new country, a new club, new teammates. So a lot of things will be different for him.”

Let’s take it in order. 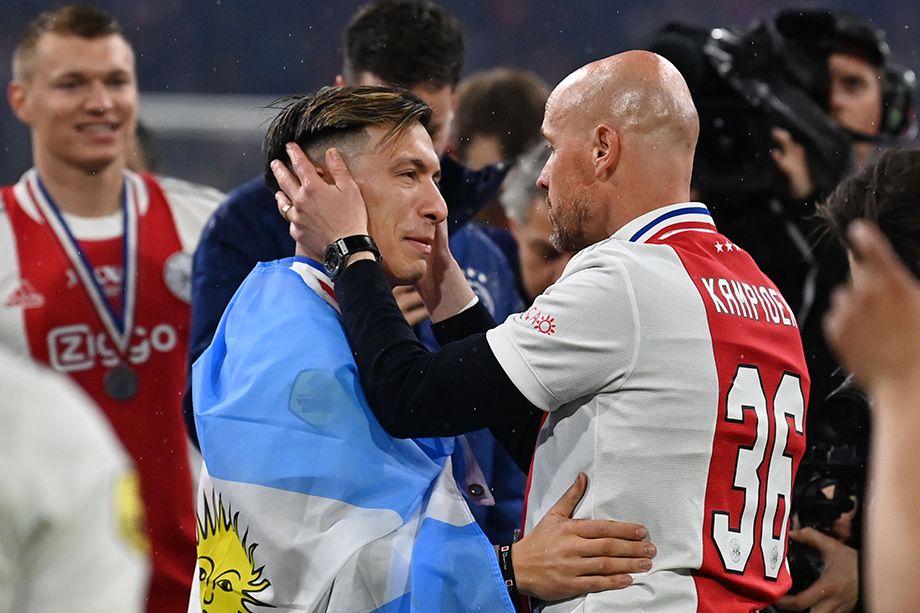 Lisandro Martinez with the flag of Argentina

Martinez is a guy from the outback, where his character was formed

Lisandro Martinez was born in the town of Gualeguay into a large and poor family. “In order to play football, we cut the branches of the eucalyptus tree and made goals out of them,” recalls Lisandro. The situation was so dire that at times there was not enough food. “In Argentina, not every family has everything they need, sometimes I had nothing to eat. So that’s the motivation that some Argentines have and I can’t explain it. If I need to step over corpses, I will. In every situation, I want to win because I know that I am fighting to ensure that every member of my family and my friends has food, ”explains Martinez. 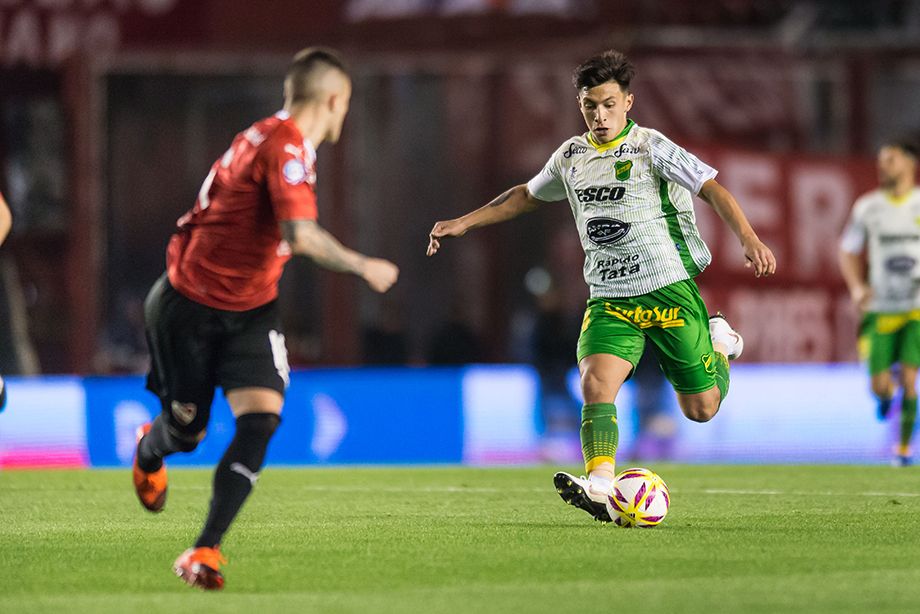 Lisandro Martinez in “Defensa and Justicia”

Football was an opportunity to break into another life, and the guy tried very hard. Modest data compensated for the willingness to fight. The doubts of others also helped Martinez to form character. At the Newell’s Old Boys academy, the boy was considered too short and weak. So the young defender was not particularly sad when he changed the status club to the very modest Defensa and Justicia. Here Lisandro felt a family atmosphere and support, which was also lacking in childhood.

In terms of football at the Defens, Martinez has improved in the promotion of the ball. The key figure in the team was the coach Sebastian Becaccece, whose philosophy is attack-attack-attack and a short pass. The coach preferred to take a risk and lose the ball to a dull transfer to a near one. Within this bold style, Martinez played as a left center back or left winger. And in two seasons, the defender earned an invitation to Ajax. 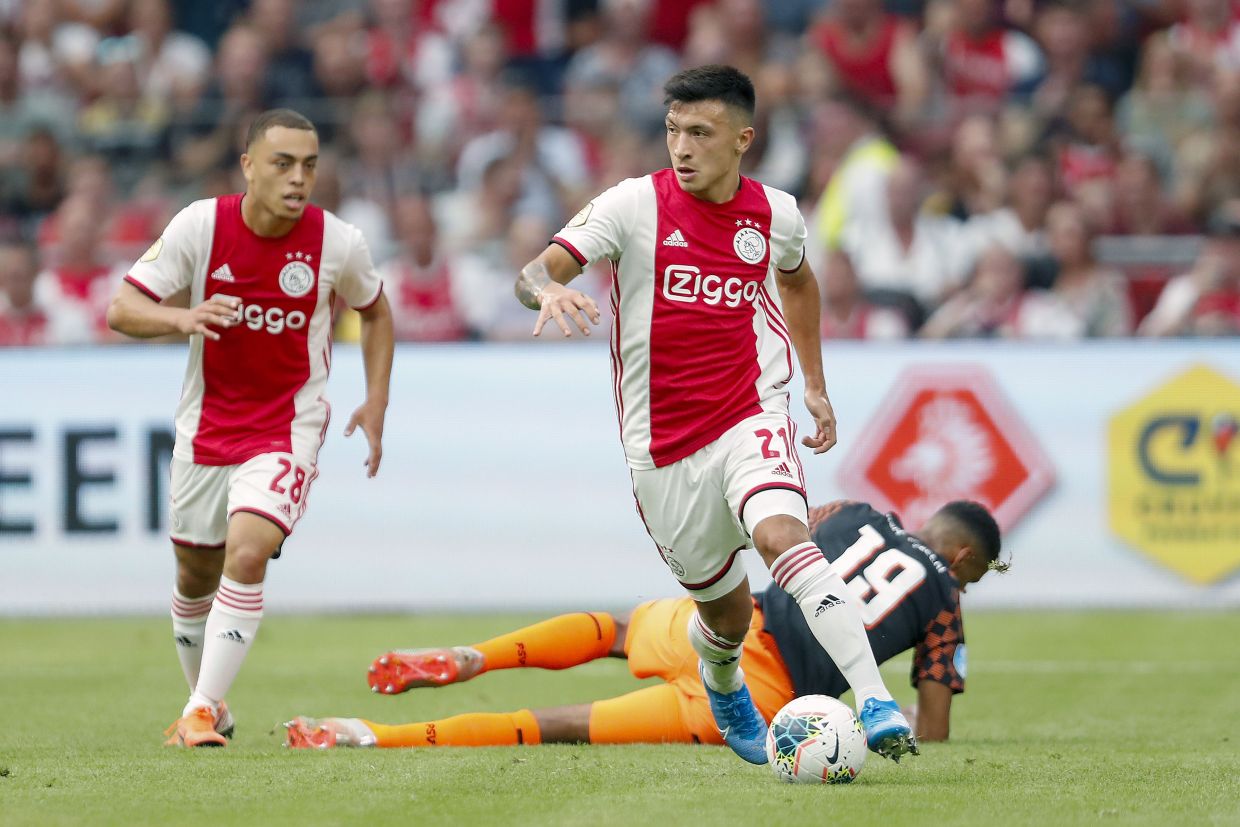 The transition came amid the departure of Matthijs de Ligt to Juventus. And at first, Lisandro was faced with a banal level difference. “I wanted to run home and cry,” the player admits. — I am a football player who likes to have the ball, but when they [партнёры по «Аяксу»] played in one or two touches, then they simply destroyed me. It’s unbelievable how much I missed the pace.” According to the worked out scheme, Lisandro accepted the situation, realized the requirements and began to plow. After the pre-season, he was already in order and made his debut in the first round.

In a competitive environment, the versatility of the Argentine came in handy. Erik ten Hag saw him as a player capable of covering three positions: left central defender, left wing back and defensive midfielder. So for the first three rounds of the Eredivisie, Lisandro played in the place of de Ligt, and then moved up to the support zone.

He was ready for new features. “You have to do your own work,” explains Lisandro. “I watch football all the time: I watch different players in all positions – how they move, what decisions they make.” Examples of centerdefs for him are Virgil van Dijk and Aymeric Laporte, in the support zone he focuses on Sergio Busquets and Joshua Kimmich. “I love his calmness and ability to read the game,” Martinez explains. 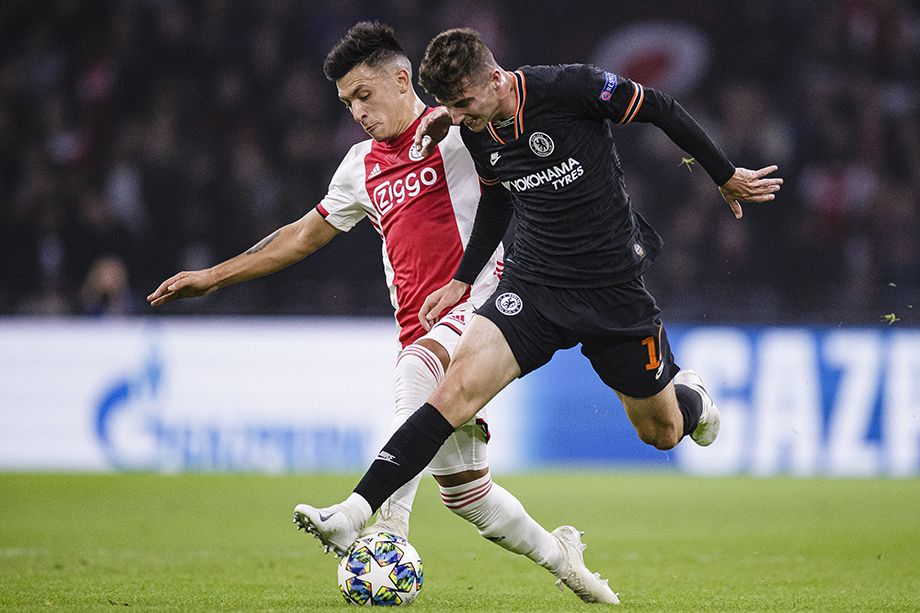 Lisandro Martinez in the Champions League against Chelsea

In the 2021/2022 season, the Argentine had to win back a place at the base, when Ryan Gravenberh opened up in the support zone, and Daley Blind preferred ten Hag in defense. However, in the end, Lisandro returned to the squad – to the center of defense, and was responsible not only for reliability, but also for the promotion of the ball. Ajax could afford to play with such a deep playmaker.

Here are his results for the season in the Dutch championship:

Lisandro is at the top of the ball promotion, and his long passes are almost radio-controlled. And he tries to cut the ball exactly in the foot of the attacking player.

How will Manchester United use him?

Martinez, of course, is a football player under the requirements of ten Haga. Manchester United don’t have left-footed centre-backs and no defenders with that kind of attacking influence. The club led Pau Torres (left-footed) for a long time, but ten Hag insisted on the transfer of Lisandro (infa by Laurie Whitwell from The Athletic). How does the coach plan to use it? Two obvious options: centre-back and defensive midfielder. 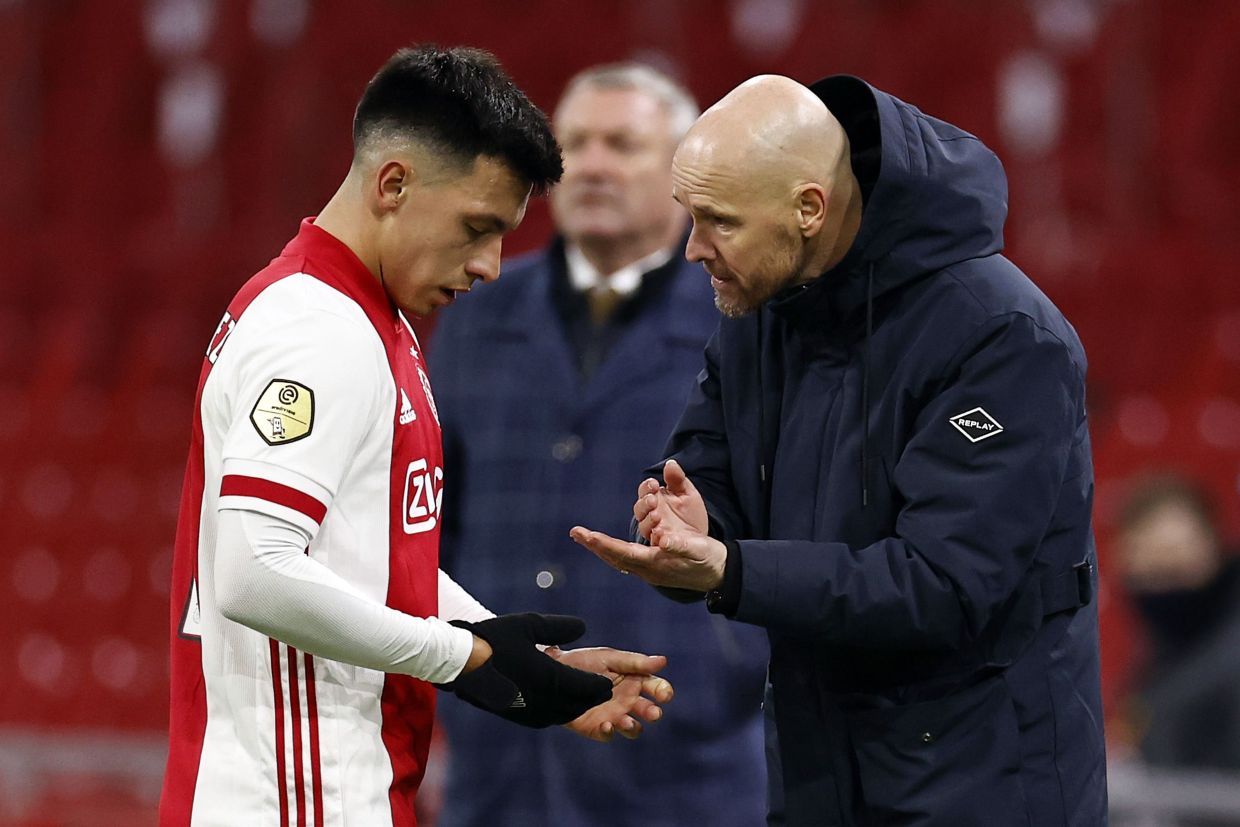 Profile position, however, the player’s height has already become a meme. Lisandro is the shortest CB in the Premier League with his 175 cm. The guy, of course, is used to fighting fears, but the Premier League is a special level. For every meme about the hobbit or Hasbik, of course, you can answer with a parallel with Fabio Cannavaro, who, with his 176 cm, was the best football player on the planet. Or remember Franco Baresi (176), Carles Puyol (178).

If we count the percentage of martial arts won, in the Champions League (Statman Dave figures), Lisandro is no worse than Harry Maguire (64% success vs. 61%) and on the same level as Pau Torres. In the context of the whole season and all tournaments (FBref), his figures are worse – 55.2%. Does this mean that Lisandro is bad? Depends on the context.

It is clear that Martinez is not the king of the air, but the Ajax system did not require him to constantly fight for the second floor. It is not necessary that every rival of Manchester United will try to load Lisandro and put forward a pillar. 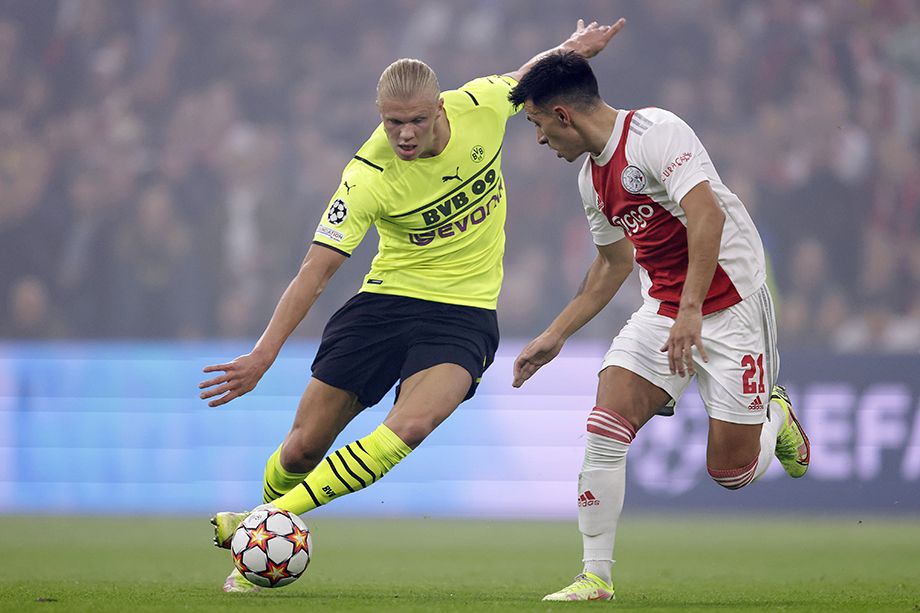 Although there are such cuts: in specific matches against closet strikers, Lisandro acted on his strengths: reactions, the ability to read episodes and control his body. Ajax played Borussia Dortmund Erling Haaland and Roma Edin Dzeko. And the Argentine Butcher had the task of neutralizing both. Holland – 194 cm, Dzeko – 193 cm. Thanks to a smart choice of position, aggression and good starting speed, Lisandro did it. Holland did not score, Dzeko scored after a rebound (video).

On the other hand, there is the example of Daly Blind (180 cm), which Louis van Gaal tried to use in the center of defense. The arguments were about the same: intelligence would be more important than physical data (although Blind, of course, is not so sharp). At the Premier League level, it turned out so-so, but at Ajax, Blind is still successful in this position. 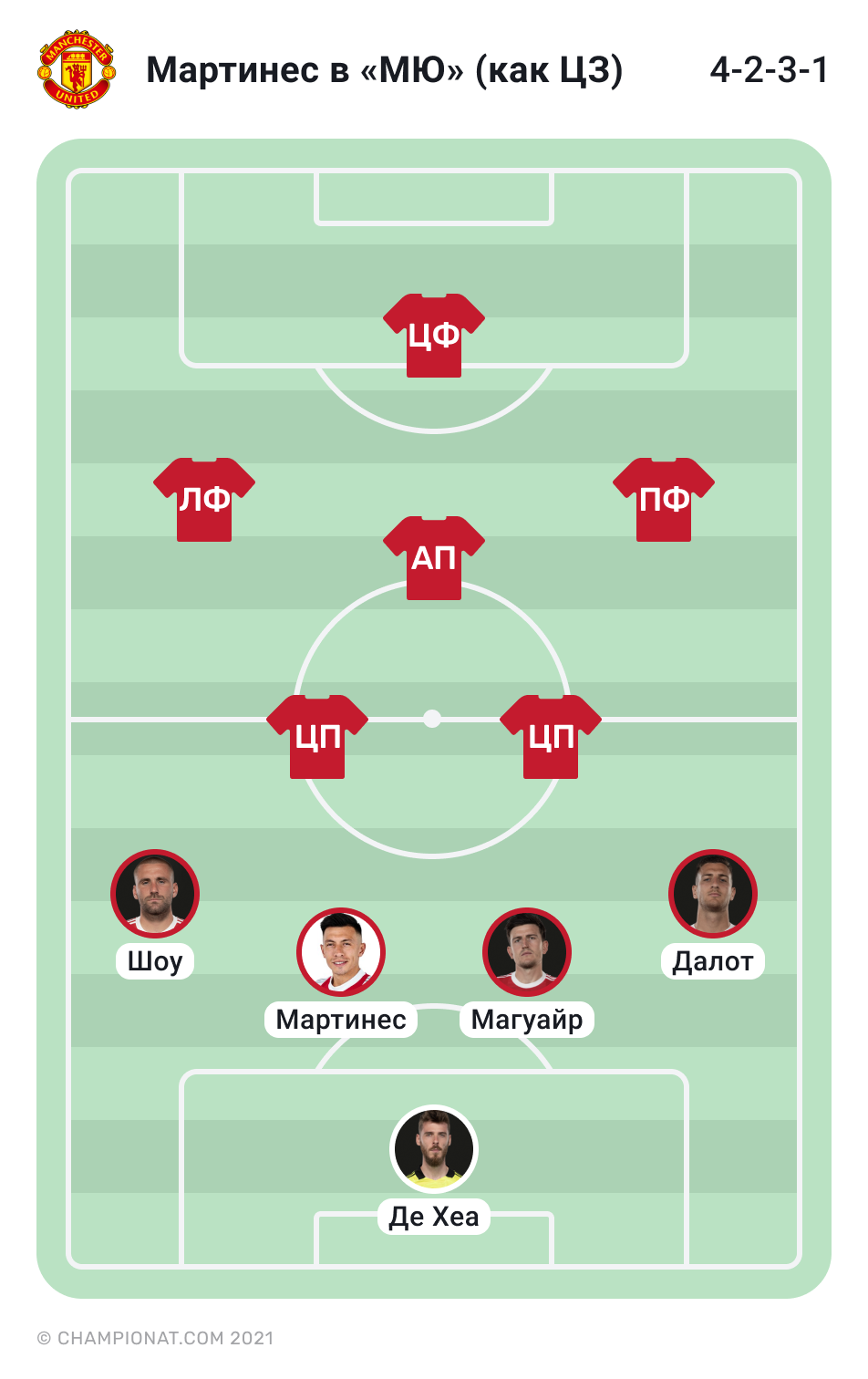 When Martinez is in central defence, Harry Maguire will appear on the right. In pre-season matches, ten Hag uses it here, although Maguire used to play on the left. Rio Ferdinand believes that Martinez as a left-center defender will come in handy for Manchester United to open up a tight defense. In general, the style of “Ajax”. True, another option from Rio is that in the matches with the “buses” Martinez, in principle, will not be on the field. 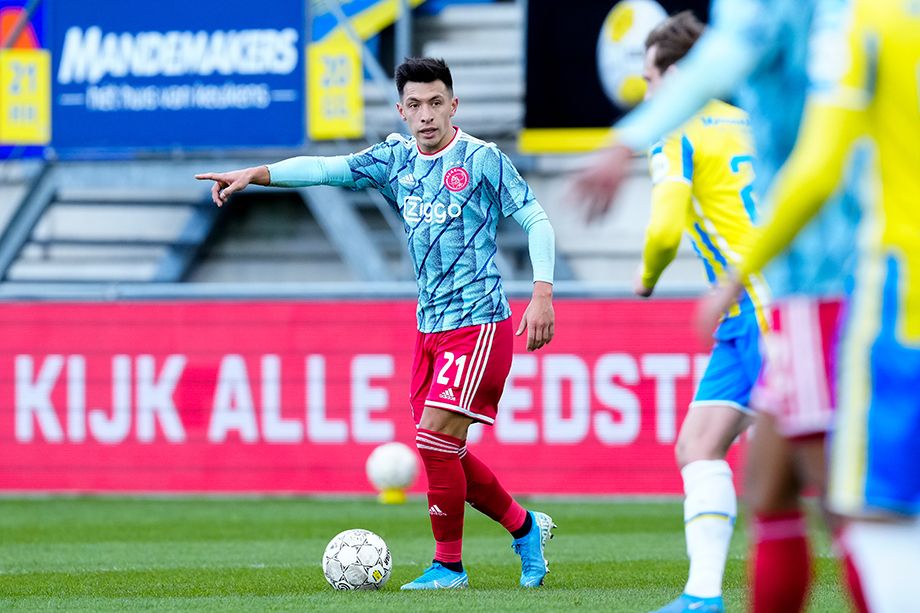 Martinez as a defensive midfielder

The support zone option is also possible, there is even a ready-made solution: restarting the Van de Beek-Martinez connection from the 2019/2020 season. Martinez the defensive midfielder is everywhere. He has enough energy and endurance to cover a large area, and a smart partner works nearby in free zones. 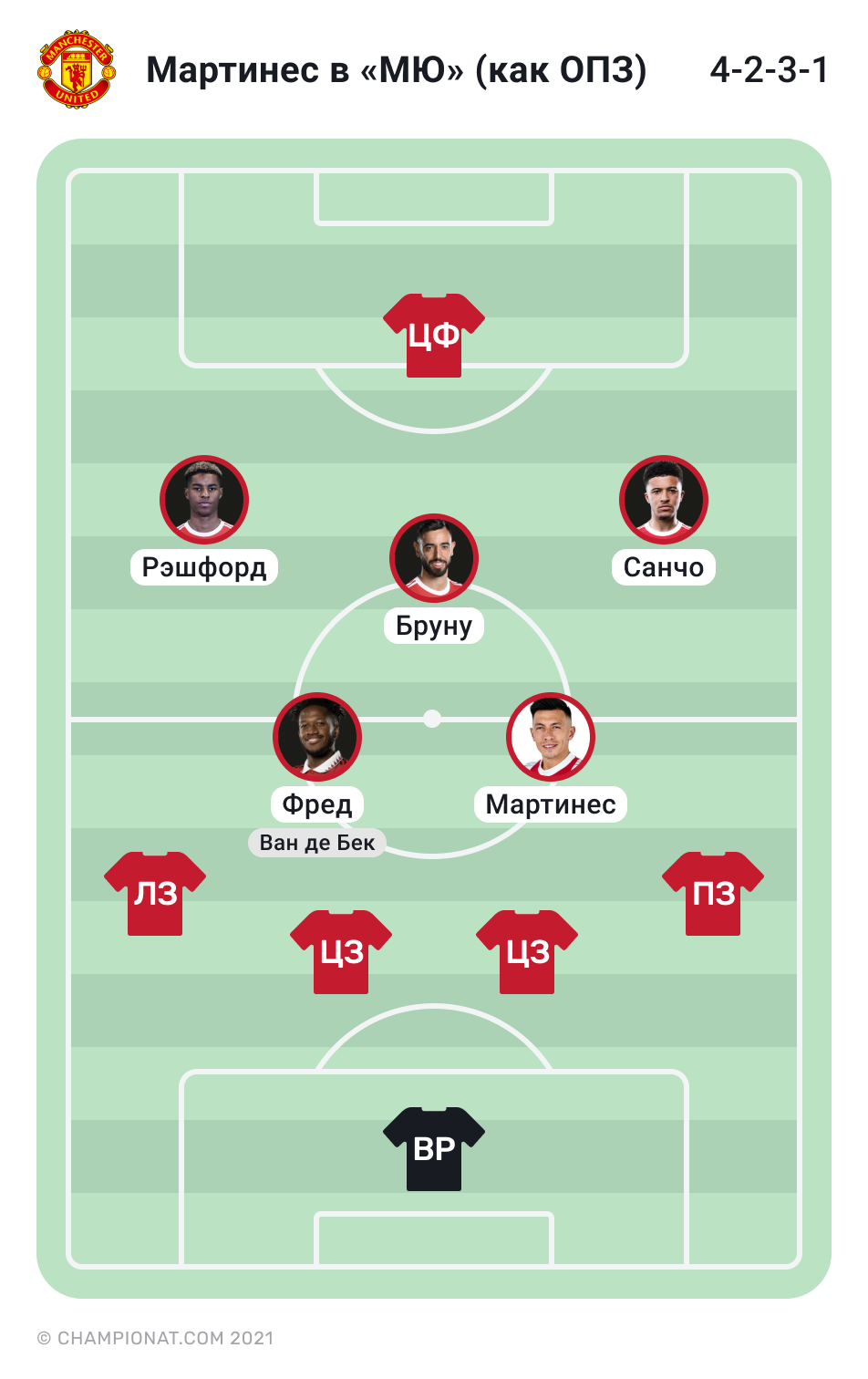 So it was in Ajax: Martinez goes down to the goalkeeper to set the tone for the attack. The transfer goes to the right flank, where, in accordance with the ideas of ten Hag, Ajax forms a numerical advantage. Martinez himself remains to insure in the center. 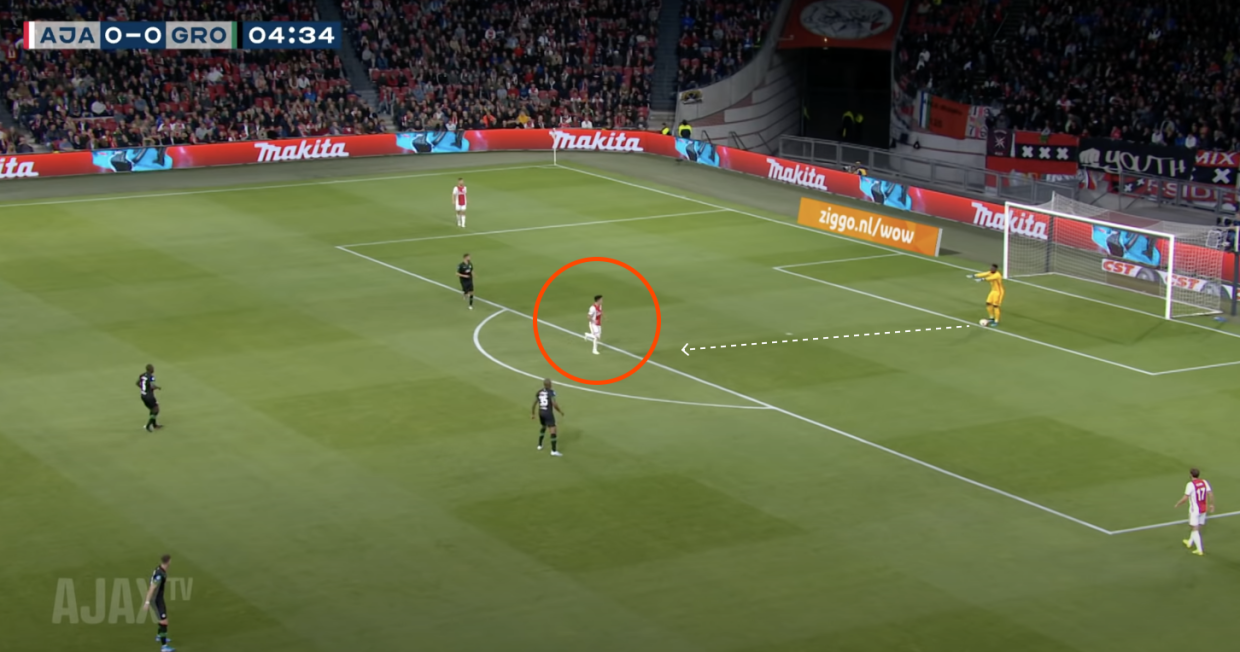 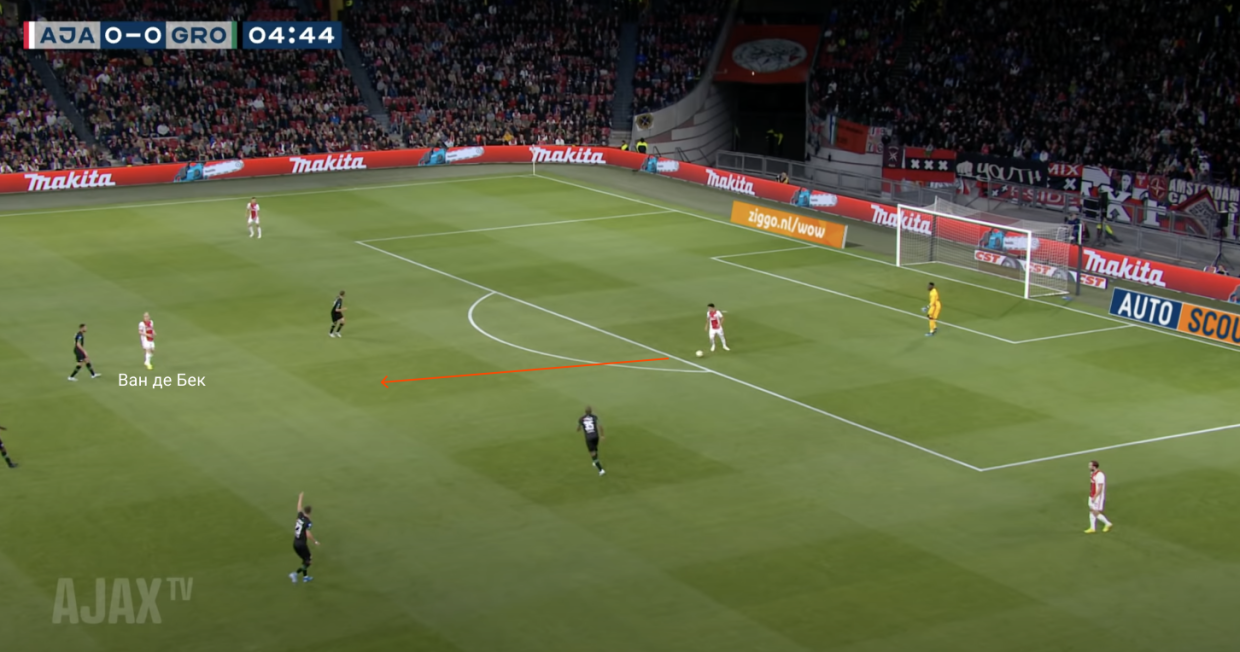 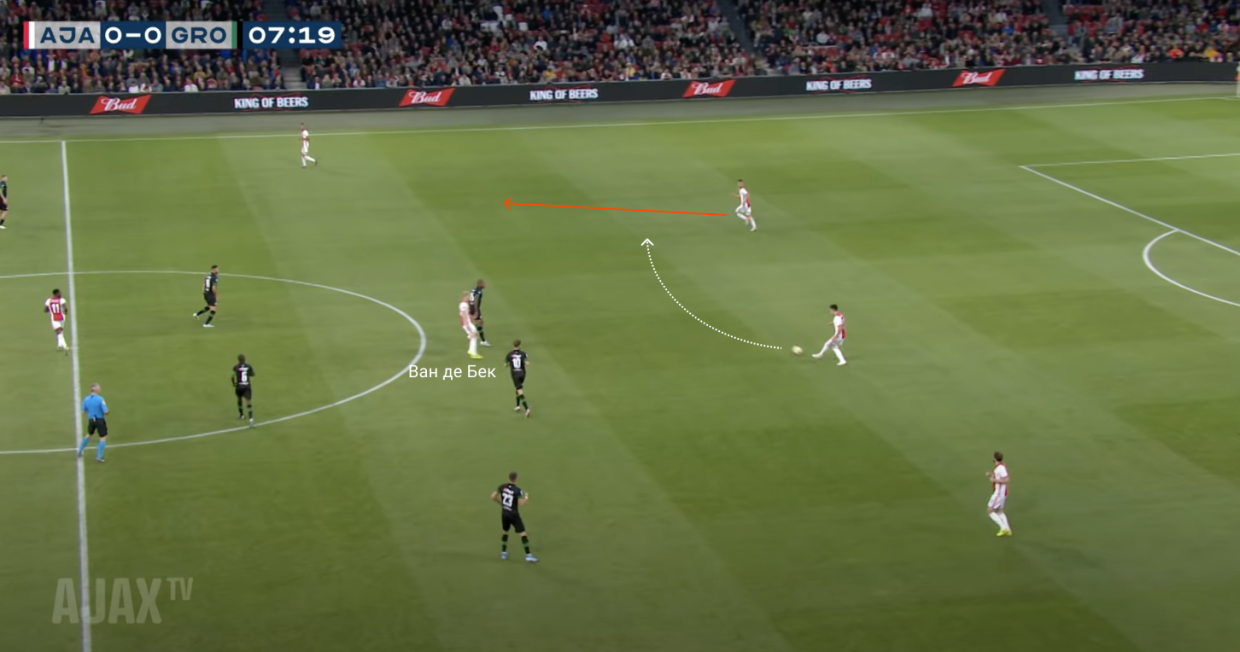 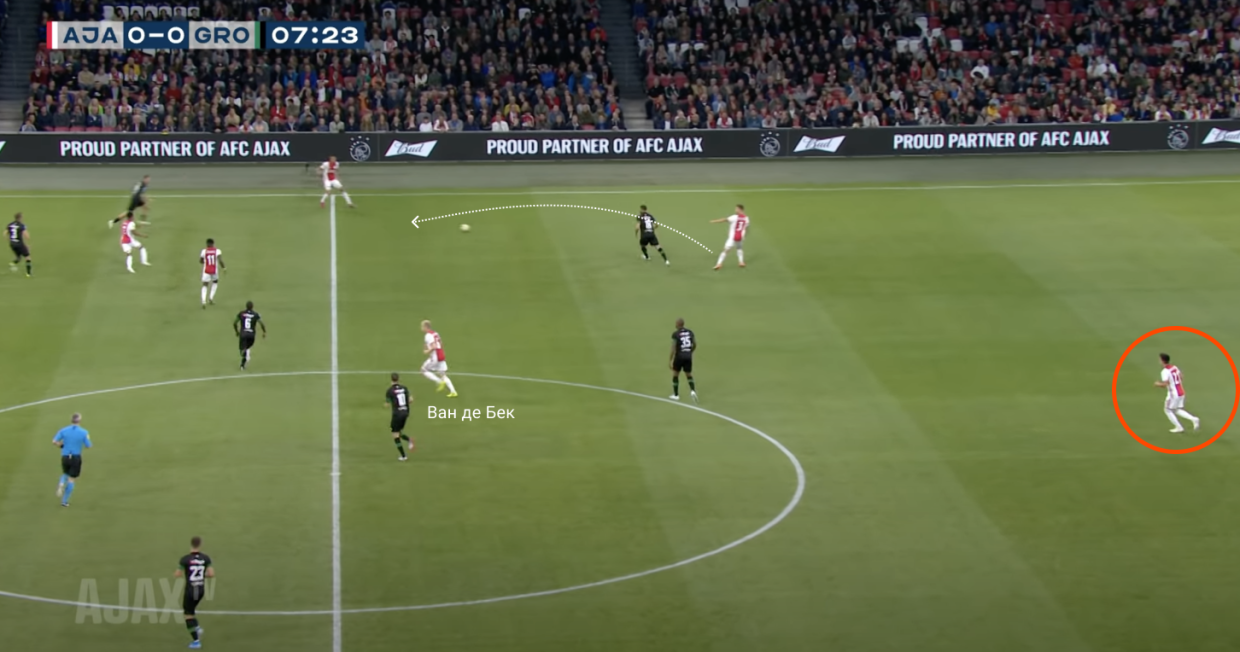 Or here he acts as a second pace: he will enter a free position and definitely break through from afar. 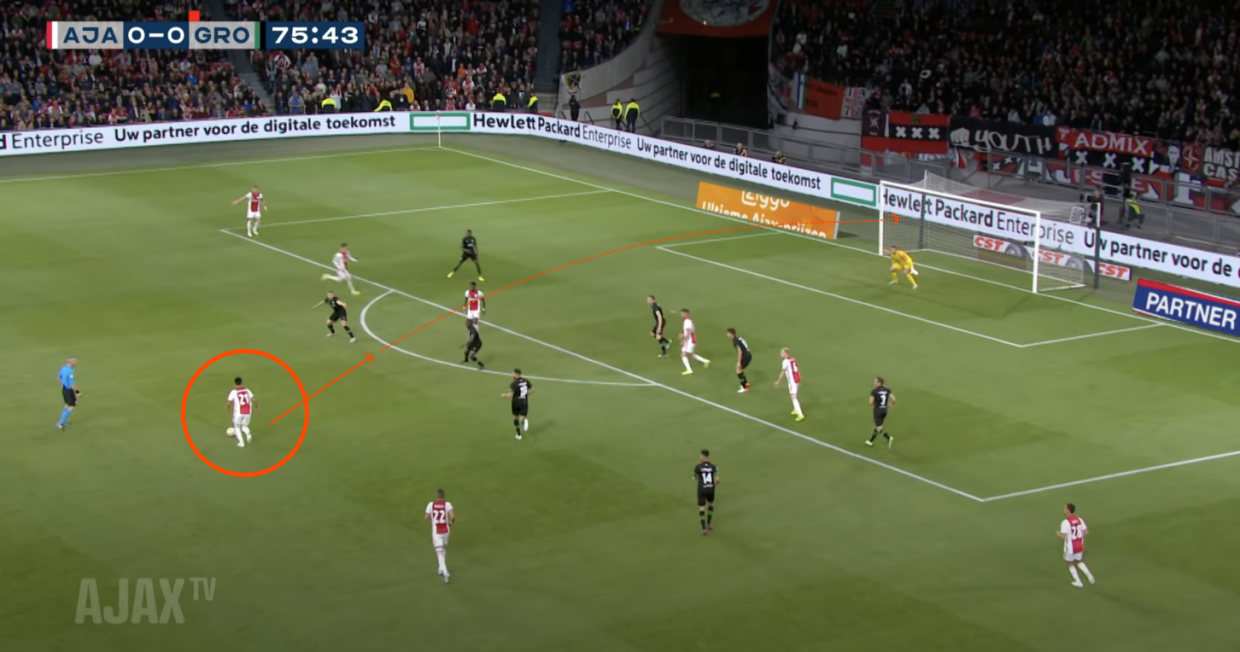 Or even breaks into the penalty area: 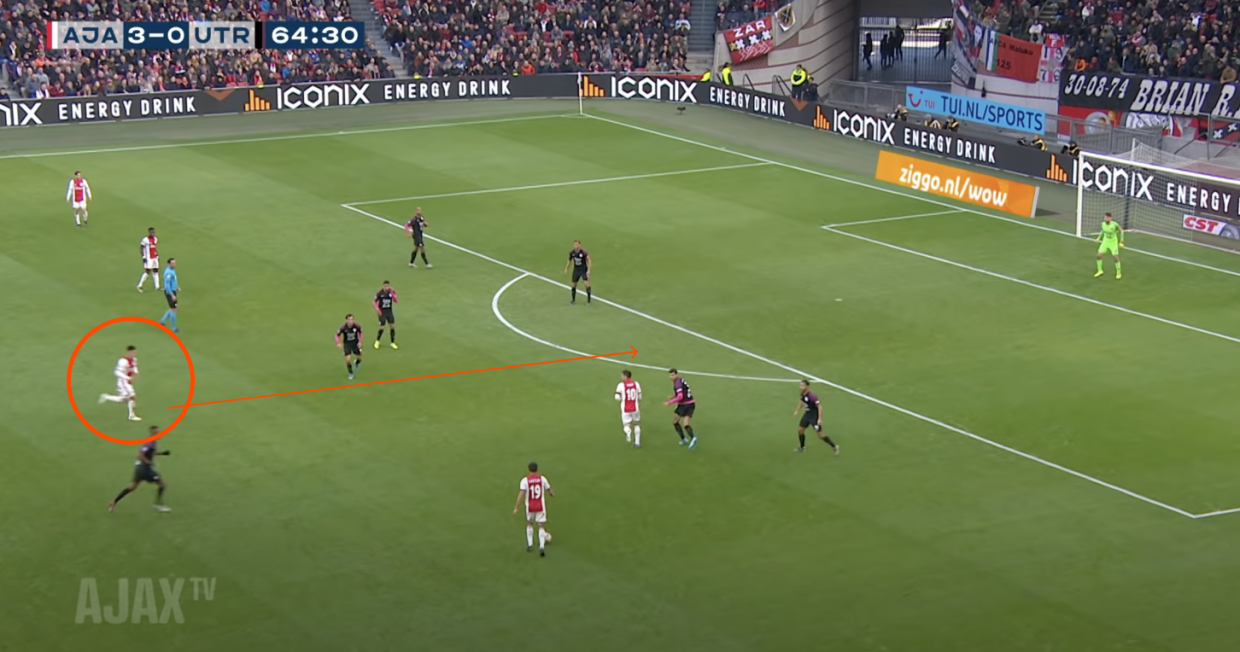 An example from the match with Utrecht 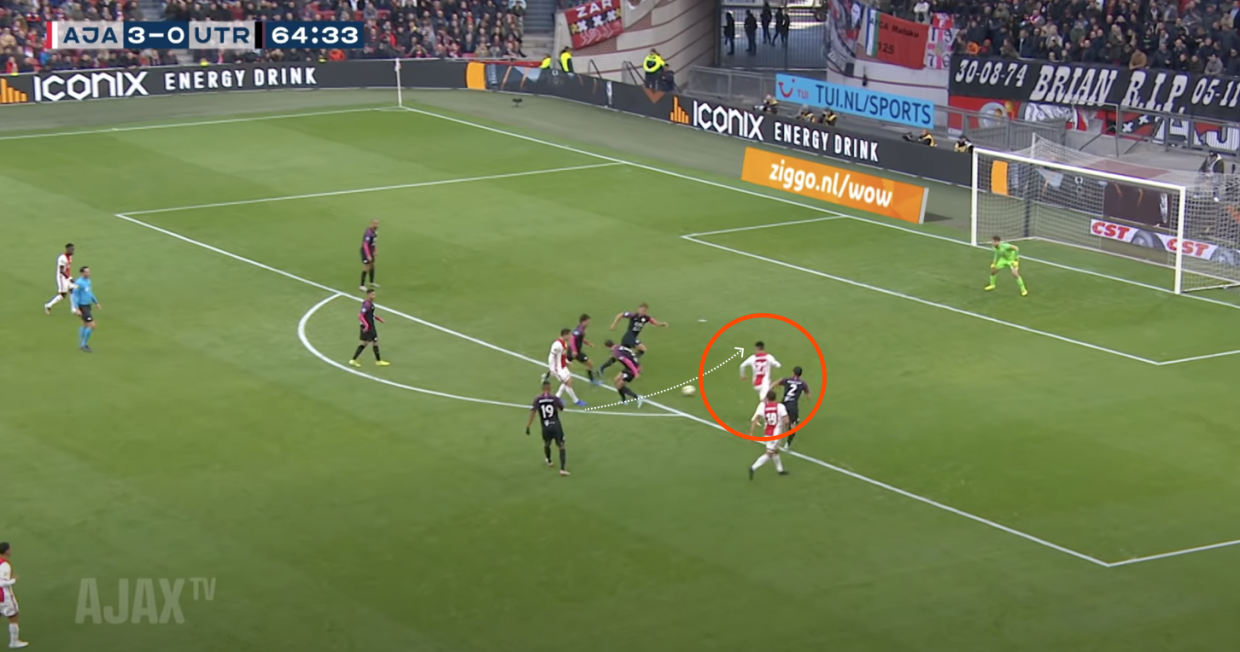 An example from the match with Utrecht

Judging by the training, the option of the center of the field “hard defensive midfielder + deep playmaker” ten Hag is playing. Van de Beek doesn’t necessarily have to be the left central midfielder. The place is held for Frenkie de Jong, but if it doesn’t work out, there’s Fred, who played here in preseason. Or the same Donny, even Christian Eriksen or Bruno Fernandes. This configuration may be the most balanced. United will get a tenacious midfielder close to the defense who is strong in moving the ball.

It will be ironic if Martinez turns out to be the very defensive midfielder that Manchester United have been looking for for so long – a tougher version of N’Golo Kante. However, wherever Lisandro plays, it seems that since Roy Keane, United have not had a player with such temperament and attitude, ready to fight to the death on the field.