On the night of May 7-8, UFC 274 took place in Phoenix, Arizona. In the third most important fight, Michael Chandler brutally knocked out Tony Ferguson with a front kick – the fight attracted more attention than the main fight between Charles Oliveira and Justin Gaethje. This is not surprising – in the almost 29-year history of the promotion, a knockout in this way by Iron Mike was only the eighth. Let’s take a look at the other seven.

Anderson Silva was the first to check the opponent’s chin with his foot. At the 4th minute of the 1st round, the Legendary Spider noticed that Vitor Belfort lowered his hands too low. Silva immediately waved his leg, and the Phenomenon flopped on the ass – Anderson had to make a couple of control finishing moves before referee Mario Yamasaki separated the fighters. 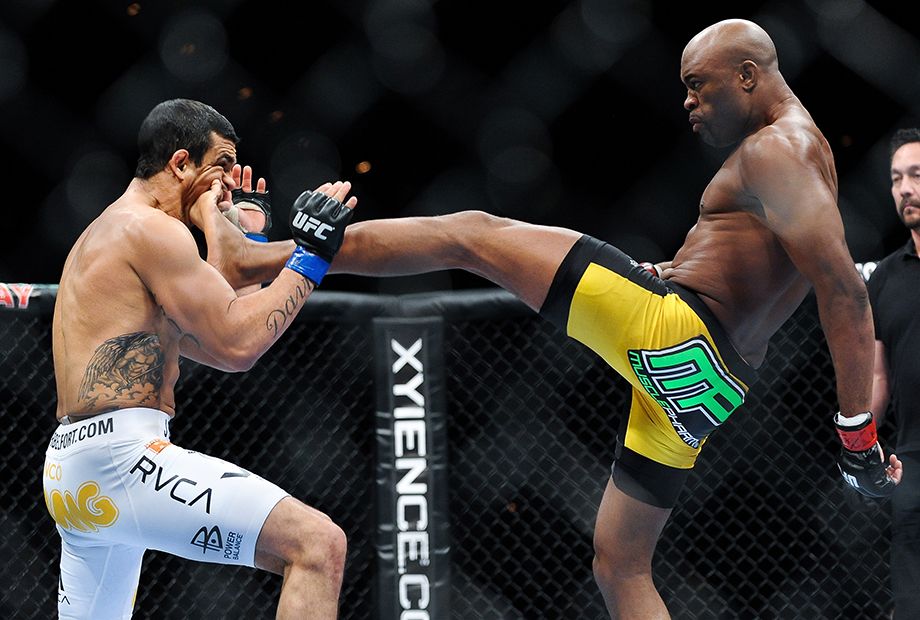 For Silva, the victory was the 14th in a row in the UFC – two more successful belt defenses, and he met with Chris Weidman, whose dilogy ended in the most deplorable way. And Belfort, already a year and a half after this fight, fought for the belt again, but in light heavyweight. With Jon Jones, he lasted longer and lost by submission in the fourth round.

Three months later, on the main card of the UFC 129 tournament, Lyot Machida gave a brutal execution to 46-year-old Randy Couture. Before the fight, the great veteran did not look completely helpless: he went on a series of three victories, and the last two were early. True, the basic Greco-Roman style wrestler finished not the strongest rivals at that moment – the same elderly Mark Coleman and boxer James Toney.

Machida couldn’t afford to lose. The Japanese started in MMA with 16-0, and then lost twice in a row, so a clear hit in the 2nd round was an excellent rehabilitation in front of the fans. Liotou took aim for a long time, but apparently Couture did not suspect anything. After the blow, the legend collapsed on his back, and the Japanese ran to finish off – the referee did not allow to deprive Captain America of the rest of his health. This fight encouraged Couture to end the sport, and Machida is still in business – on May 13, the 43-year-old Japanese will fight Fabian Edwards in Bellator. 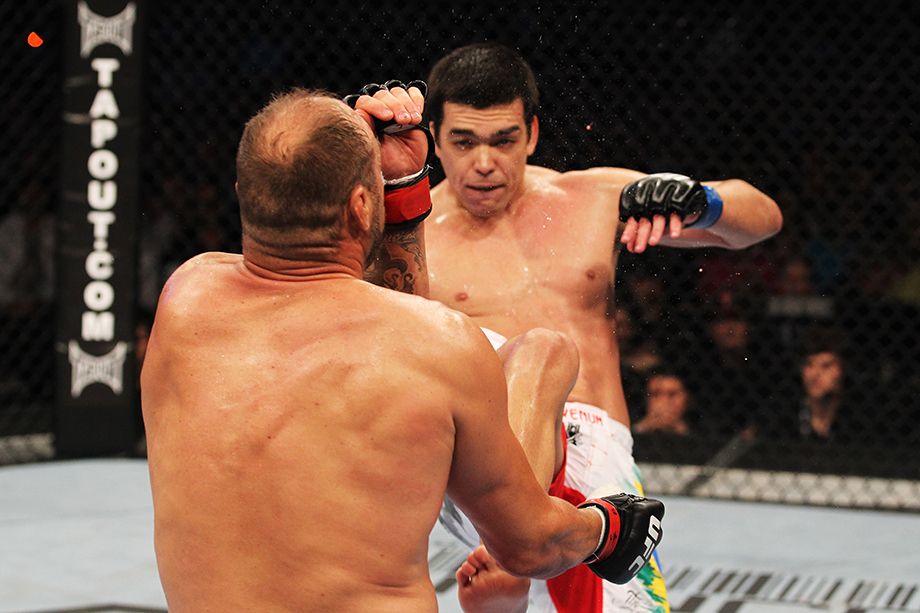 In all the fights in the UFC, where there was a knockout with a front kick, at least one top fighter participated. In addition to what took place in December 2012, when the Australian Benny Alloway sent compatriot Manny Rodriguez to rest. The tournament was held in the homeland of the fighters, and Robert Whittaker fought in the co-main bout.

During the fight, Alloway slowed down the pace of the opponent with kicks, and in the episode with a knockout, he first hit the pressing Rodriguez in the ribs. This didn’t bother Manny, but as soon as he leaned over in an attempt to get to his feet, Benny landed not even a front kick in the traditional sense. The fighter performed a poke in order to protect, but hit right in the head. After that, it was required to finish off several times and wait for the judge to stop.

In August 2013, Alistair Overeem and Travis Brown fought in the co-main fight of one of the UFC Fight Night tournaments. Naturally, the Dutchman was considered the favorite, despite the fact that the fans had not yet had time to give up on Brown. At the end of the 1st round, the fighters reduced the distance, and Travis gently kicked him in the jaw – Overeem immediately fell, and the American brutally finished him off with two hammerfists.

Perhaps the most legendary front kick in the UFC happened five years after the previous one. Lyottu Machida knocked out Vitor Belfort and became the first and so far the only fighter in the UFC with two knockouts with such a blow. The Brazilian also excelled – he is the only one who came down twice from the front kick.

The rights to the video belong to the UFC. You can watch the video on the UFC YouTube channel.

The fighters were in the center of the octagon when Liotou tried to confuse the opponent with false movements. As a result, the Japanese sharply waved his leg, hitting not even in the chin, but in the area of ​​​​the right cheek. Belfort was on the floor in the position of a soldier, and Machida bowed to the knocked out opponent and knelt in front of him. Unlike Couture’s knockout, Dragon immediately realized that Belfort would not get up, and did not even twitch to finish off. This fight was the last in MMA for the Brazilian – after 3.5 years he beat Evander Holyfield in a boxing match and, it seems, will continue to entertain fans in the ring.

It was not without fighters from Russia: at the end of 2019, Magomed Ankalaev met with the Congolese Dalcha Lungiambula. By that time, Magomed had already recovered from the defeat of Craig Paul – the Russian knocked out Marcin Prachnio and defeated Klidson Abreu by decision. Lungiambula with a record of 10-1 and the nickname Champion was waiting for a difficult fight.

The meeting ended in the 3rd round. Ankalaev noticed that Dalcha lost concentration and waved his left leg, hitting him right in the chin. The opponent was clearly knocked out, but froze in the standing position, so Magomed dispelled Mark Goddard’s doubts with a right hook. 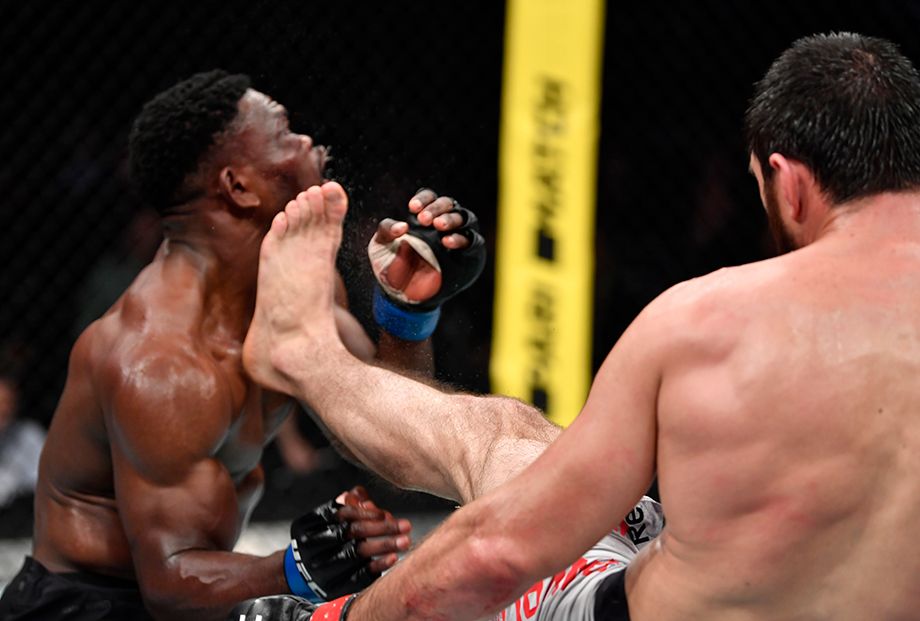 The most recent front kick knockout before UFC 274 happened at the 268th tournament on November 6, 2021. Veteran and former promotional lightweight champion Frankie Edgar tested Marlon Vera. After two rounds, there was a draw on the scorecards by a majority of votes, but a minute before the end, the Ecuadorian caught the opponent with a biting blow from the right – he didn’t even have to finish it off.