The guy with the hammer and sickle tattoo. The mysterious American strangled Nick Maksimov. Video 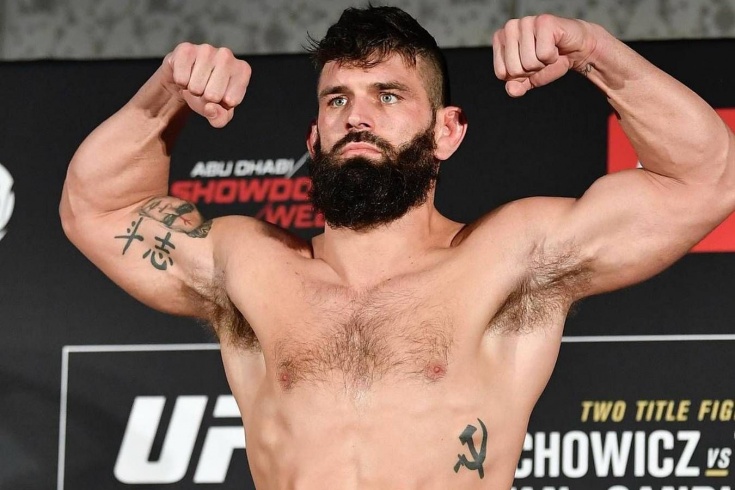 The perfect anaconda, Dana White’s sympathies and a mysterious past. Petroski is a future UFC star.

At this moment, the UFC Vegas 54 tournament is taking place at the APEX home arena in Las Vegas (Nevada, USA). In the main fight, Jan Blachowicz and Aleksandar Rakic ​​will meet. But they opened the evening of martial arts for a guy, one way or another related to our country. The ancestors of Nick Maksimov emigrated from the Soviet Union to the United States in the 30-40s in search of a better life. And as for Andre Petroski, we will return to him after the story about the bright fight of these guys.

The guys approached the face-to-face fight on a good move. Andre had seven wins and two losses to his credit. He got into the UFC in a very non-standard way. Even after losing in the semi-finals to The Ultimate Fighter, he impressed the UFC President so much that he got a contract with the league. And he fully justified the hopes, having completed both of his fights ahead of schedule. Well, Maximov did not know defeat at all in his professional career.

Nick trains at the Diaz Brothers Academy and is friends with Nate, who inspires him to sports feats. It is clear that his strong side is the fight. But here the scythe found a stone. 30-year-old Andre has been wrestling since the age of four and has achieved great success in the amateur arena. True, the guys started their duel with standing work. And with the very first low-kick, Petroski almost knocked the opponent down.

This was followed by another exchange of blows, after which Nick decided that it was time to transfer the opponent to the canvas. The passage to the right leg turned out to be adventurous. Maksimov’s opponent effectively countered and in just 2 seconds he found himself in a dominant position, locking his nickname’s neck. After that, Andre turned the opponent on his back and strangled the reference “anaconda”. The grip was so tight that the referee did not immediately realize that the fighter was already “sleeping”. And only after the cries of Andre himself that everything was over, he rushed to save Maksimov.

The rights to the video belong to the UFC. The video can be viewed on the UFC page in Vk.

The most spectacular Victoria, which spoiled Nick’s previously perfect record. Let’s hope it’s not health. And now about Petroski himself. There is no doubt that he is an outstanding fighter. Defeats? Those who didn’t fall didn’t get up. It’s not just that Dana White believed in him so much.

After the fight, the winner asked for one of the toughest middleweight grapplers to compete. But an attentive viewer noticed another curious feature. On the left side of his chest there is a tattoo depicting a sickle and a hammer – a symbol and an integral part of the coat of arms of the Soviet Union.

But on the net you will not find information about what this guy has to do with the USSR. Information about his sporting achievements from childhood to the present is available on the network. But about his personal life since his wedding. Petroska has a daughter. And that is all. Who his parents are, what relation he has to the USSR or Russia, the fighter carefully hides.

Some curious detective story is planned, which we will try to unwind a little later. And now, meet another bright rising UFC star.